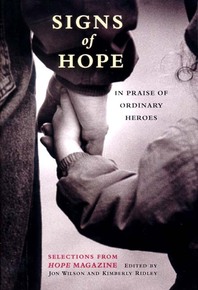 A collection of stories by and about uncelebrated people who make a positive difference in their communities and the world.

Several years ago, Jon Wilson, editor of acclaimed WoodenBoat magazine, decided he'd had enough of the constant barrage of violence and misery in the media. His answer was the magazine Hope, dedicated to stories by and about uncelebrated people who make a positive difference in their communities and the world.

Signs of Hope gathers the best of that journal, and restores our faith in the power of individual acts. For instance: a widow writes about the death of her husband and her struggle to endure; a counselor describes the transformative power of summer camp for children with a fatal blood disease; a psychologist discovers the vital human beings behind his patients' diagnoses; a father reveals what his newborn daughter taught him about men, women, and family. This is a collection to remind us of our common humanity and our capacity to give and to love. The magazine Hope is the winner of Utne Reader's 9th Annual Alternative Press Award and was named one of the "10 Best Magazines" by Library Journal.