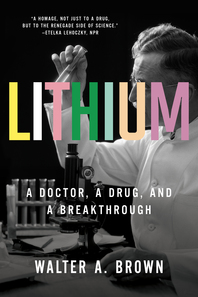 In this incredible story of a miracle drug and the forgotten pioneer who discovered it, Lithium pays “homage to... the renegade side of science” (NPR).

From insulin comas and lobotomy to incarceration; those who suffered bipolar disorder endured dangerous, ineffective treatments for centuries until a breakthrough in the 1950s offered salvation. Lithium’s efficacy at both ending and preventing manic depressive episodes was discovered by John Cade, whose years running a psychiatric ward as a prisoner of war sparked a hunch that put him on the path to revelation. The miraculous metal has since salvaged an untold number of lives but even after its healing power was discovered, it was decades before the medical community could be convinced that lithium was not only safe but life-saving. Walter A. Brown reveals how close we came to missing out on this extraordinary drug and showcasing the possibilities of scientific curiosity.

“The intertwined story of Cade and his momentous finding is told in Lithium, a compelling book by US psychiatrist Walter Brown... What Brown does superbly well is to show that Cade made his discovery without access to advances in technology or to modern facilities — and almost despite them.” — Nature

“His [Walter Brown's] beautifully written and insightful book deserves to be widely read by poets and novelists, among whom instances of bipolar disorder are above average, and, more importantly, by all those involved in the regulation and provision of medicines.” — Literary Review