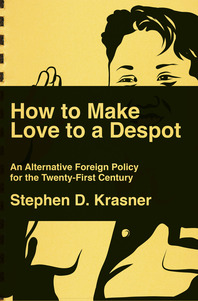 After generations of foreign policy failures, America can make the world safer by abandoning utopian goals and working with difficult characters.

The United States has invested hundreds of billions of dollars in the idea that state-building can make the world “safe for democracy” but the return on that investment has been woeful. Witnessing this failure, many observers hold the view that investment in undemocratic countries should halt. Yet ignoring these troubled countries risks our safety. Drawing on his formidable foreign policy experience, Steve Krasner explains that eliminating corruption or holding free and fair elections is often not possible today in many parts of the world but negotiated compromises and halting large-scale theft is. Better security and some economic growth are possible everywhere. How to Make Love to a Despot defines a new and pragmatic American foreign policy vision that quells terrorism and leads to “good governance” around the globe.

“One doesn't have to agree with Krasner's conclusions to see the value in this book. It is tightly argued and thought-provoking and a must read—even for those who believe that support for democracy should remain a cornerstone of American foreign policy.” — Former Secretary of State Condoleezza Rice