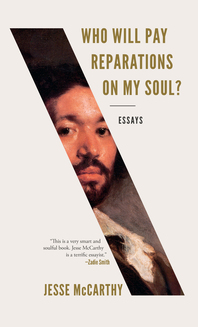 ‘This was our music, and our conscience’: how I fell in love with French hip-hop

Extract in The Guardian

A supremely talented young critic’s essays on race and culture, from Toni Morrison to trap, herald the arrival of a major new voice in American letters.

Ranging from Ta-Nehisi Coates’s case for reparations to D’Angelo’s simmering blend of R&B and racial justice, Jesse McCarthy’s dazzling essays capture debates at the intersection of art, literature and politics in the twenty-first century with virtuosic intensity.

In “Notes on Trap”, McCarthy borrows a conceit from Susan Sontag to dissect the significance of trap music in American society, while in “The Master’s Tools”, Velázquez becomes a lens through which to view Kehinde Wiley’s paintings. Essays on John Edgar Wideman, Terrance Hayes and Claudia Rankine survey the state of black letters. In “The Time of the Assassins”, McCarthy, a black American raised in France, writes about returning to Paris after the Bataclan massacre and finding a nation in mourning but dangerously unchanged. Taken together, these essays portray a brilliant critic at work, making sense of our dislocated times while seeking to transform our understanding of race and art, identity and representation.

"McCarthy’s analyses and observations are masterfully articulated, as are his dissents… With a younger readership at the top of his mind but an open invitation to all, McCarthy seems determined to draw attention to African-Americans’ ‘true strength’ and ‘worth.’ He well knows that if despair brought on by a troubled world is to be kept in check, the right prescriptions must be offered, the right traditions advanced, the right lessons drawn, and from the right people." — Jerald Walker, The New York Times Book Review

"McCarthy, an assistant professor at Harvard, draws on a broad array of cultural and historical influences — from Kara Walker to Nas to Sappho — in these essays, which he began writing in 2014. He approaches the country’s cultural changes in the intervening years through the lens of the arts and intellectual culture, opening with a provocative question: “What do people owe each other when debts accrued can never be repaid?”" — 16 New Books to Watch For in March, The New York Times

"This is a very smart and soulful book. Jesse McCarthy is a terrific essayist." — Zadie Smith

"Remarkable... Their cumulative range and force are as exhilarating as they are compelling... The finest essays in this book function like origami, folding together the apparently disparate into a unique and seemingly inevitable form... In sum, they illuminate, almost like a guide for the novice, the rich contemporary cosmos of black American art, literature, and philosophy." — Claire Messud, Harper’s Magazine