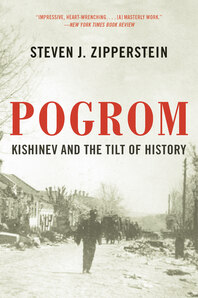 Separating historical fact from fantasy, the story of Kishinev, a riot that transformed the course of twentieth-century Jewish history, is retold.

So shattering were the after-effects of Kishinev, the rampage that broke out in Russia in April 1903, that one historian remarked that it was “nothing less than a prototype for the Holocaust itself”. In three days of violence, 49 Jews were killed and 600 raped or wounded, whilst more than 1,000 Jewish-owned houses and stores were ransacked and destroyed. Recounted in lurid detail by newspapers throughout the Western world, the pre-Easter attacks seized the imagination of an international public, quickly becoming the prototype for what would become known as a “pogrom” and providing the impetus for efforts as varied as The Protocols of the Elders of Zion and the NAACP.

With new evidence from Russia, Israel and Europe, Steven J. Zipperstein brings historical insight and clarity to a much-misunderstood event.

“Pogrom is an outstanding mix of detailed social history, close readings of texts and historical storytelling. It is never dry or merely academic. Zipperstein moves between the details of what happened in Kishinev but always has an eye for the bigger story, especially for what it tells us about both modern Russian and Jewish history, and what pogroms came to symbolise for generations of American immigrants, Zionists and socialists. It is a superb work.” — New Statesman

“Zipperstein deserves praise for the detail, balance and originality of his book. His unwinding of the events, his careful analysis of the evidence and his sensitive description of the actors are commendable. Pogrom comes as close as we shall ever get to an authoritative account of one of the most awful chapters in modern times.” — Literary Review

“This book is fascinating...” — The Jewish Chronicle

“The methodical slaughter of forty-nine Jews on the streets of Kishinev, the capital of Moldova, over the course of three days in April, 1903, was a pivotal event in the history of modern anti-Semitism, the rise of Zionism, and, as a symbol of racist violence, a catalyst for the rise of the N.A.A.C.P. With extraordinary scholarly energy, Zipperstein uncovers sources in Russian, Yiddish, and English that show not only why this bloody event ignited the Jewish imagination, its sense of embattlement in exile, but also why it had such lasting resonance internationally.” — The New Yorker

“A riveting, often painful and vivid picture of a pogrom which captured attention worldwide, Zipperstein looks beyond the event itself and demonstrates how the tragedy at the heart of Russia served as a catalyst for the widest range of institutions including the NAACP. Written with the insight of an impeccable historian, his account—that will intrigue scholars as well as the widest array of readers—can be seen as a harbinger of what would come but four decades later.” — Deborah Lipstadt, author of The Eichmann Trial