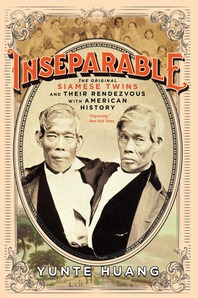 With wry humour, Shakespearean profundity and trenchant insight, Yunte Huang brings to life the story of the famous Siamese twins.

Twins Chang and Eng Bunker (1811-1874), conjoined at the sternum by a band of cartilage and a fused liver, were “discovered” in Siam by a British merchant in 1824. Yunte Huang depicts the twins, arriving in Boston in 1829, first as museum exhibits but later as financially savvy showmen.

Their rise from freak-show celebrities to rich southern gentry; their marriage to two white sisters, resulting in twenty-one children; and their owning of slaves is here not just another sensational biography but an excavation of America’s historical penchant for finding feast in the abnormal, for tyrannizing the “other”—a tradition that, as Huang reveals, becomes inseparable from American history itself.

“In the follow-up to his Edgar Award-winning Charlie Chan biography, Huang uncovers ironies, paradoxes and examples of how Chang and Eng subverted what Leslie Fiedler called ‘the tyranny of the normal'.” — Jane Ciabattari, BBC

“It is a fascinating story…” — Literary Review

“Yunte Huang is well placed to retell this extraordinary story of transnational celebrity and assimilation. Huang grew up in China... his Asian American focus is fresh and welcome.” — Times Literary Supplement

“After retiring in a small North Carolina town, they owned as many as 32 slaves and, between them, fathered at least 21 children. If that doesn't intrigue you—wait, how can that not intrigue you?” — The 50 Best Books of 2018, Newsweek

“The story of Chang and Eng, the original Siamese twins, has been covered before, but this extensively researched biography sheds light both on their extraordinary lives and the 19th century America in which they lived.” — The Herald