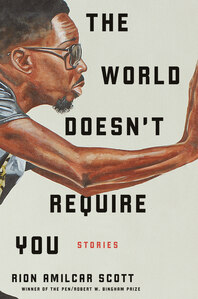 Established by the leaders of the country’s only successful slave revolt in the mid-nineteenth century, Cross River still evokes the fierce rhythms of its founding. In lyrical prose and singular dialect, a saga beats forward that echoes the fables carried down for generations—like the screecher birds who swoop down for their periodic sacrifice, and the water women who lure men to wet deaths.

Among its residents—wildly spanning decades, perspectives, and species—are David Sherman, a struggling musician who just happens to be God’s last son; Tyrone, a ruthless PhD candidate, whose dissertation about a childhood game ignites mayhem in the neighboring, once-segregated town of Port Yooga; and Jim, an all-too-obedient robot who serves his Master. As the book builds to its finish with Special Topics in Loneliness Studies, a fully-realized novella, two unhinged professors grapple with hugely different ambitions, and the reader comes to appreciate the intricacy of the world Scott has created—one where fantasy and reality are eternally at war.

Contemporary and essential, The World Doesn’t Require You is a “leap into a blazing new level of brilliance” (Lauren Groff) that affirms Rion Amilcar Scott as a writer whose storytelling gifts the world very much requires.

"Bizarre, tender and brilliantly imagined, The World Doesn't Require You isn't just one of the most inventive books of the year, it's also one of the best." — Michael Schaub, NPR.org

"Scott’s Cross River has been compared to other authors’ imagined places, from Faulkner’s Yoknapatawpha County to Jesmyn Ward’s Bois Sauvage (and I would add Nisi Shawl’s Everfair, as well as Black Panther’s Wakanda), but it’s completely his own, forged of deep roots, racial conflict and humor so mordant you’ll do double takes.... These stories range from satire (“The Electric Joy of Service”) to fantasy (“Numbers”) to horror (“Rolling in My Six-Fo’?”) and not one of them strikes a false note. There are angry notes. Even, perhaps, hostile ones. But none that are unwarranted. A few readers may be shocked by Scott’s use of cultural epithets, but those are far from unnecessary. We have so far to go and so little time to get there, Scott seems to say. Maybe spending a few hours in Cross River will help build a bridge. Or blow one up, if need be." — Bethanne Patrick, Washington Post

"Rion Amilcar Scott proves himself an impressive myth-slayer and fable-maker... The World Doesn’t Require You reminds us that having to fight racism has a strange way of distorting everything one touches.... With two books under his belt, Scott seems to have barely skimmed the surface of the many more characters and conflicts he could explore in Cross River." — Salamishah Tillet, New York Times Book Review

"A rich, genre-splicing mix of alternate history, magical realism and satire that interrogates issues of race, sexism and where both meet here in the real world." — Chris Barton, Los Angeles Times

"We know Cross River, Maryland, the setting of Rion Amilcar Scott’s stories, is fictional because it’s supposed to have been founded by slaves who successfully overthrew their masters. We also know this because God was resurrected there, which we learn from his progeny in ‘David Sherman, the Last Son of God,’ and because in another futuristic story, slave history is reenacted by cyborgs. Scott joins a growing tradition of African-American authors fusing the folksy dystopian humor of George Saunders with the charged satire of Ishmael Reed and expands on it brilliantly." — Boris Kachka, New York Magazine

"A bold new talent emerges with this boundary-shattering collection of linked stories set in fictional Cross County, Maryland, founded by the leaders of America’s only successful slave uprising. Characters range from robots to sons of God in these magical realist stories about race, religion, and violence. Think of it as Faulkner meets Asimov." — Adrienne Westenfeld, Esquire

"A bleak and beautiful collection of short stories.... Scott demonstrates the skill and long-range vision of a writer we need right now. The World Doesn’t Require You requires a commitment from readers, one that will be greatly repaid in literary satisfaction." — Emily Gray Tedrowe, USA TODAY

"You'll no doubt find yourself highlighting passages over and over again, consistently marveling over the author's storytelling genius." — Quinn Keaney, Popsugar

"Scott makes his stories feel singular.... [The] high level of energy and humor, which Scott maintains throughout, makes the novella a standout.... He bends expectations throughout the book, frequently demonstrating this idea from the aforementioned public speaker: ‘Everything horrible is just a little bit ridiculous, and vice versa.’ And despite how clear Scott is about this modus operandi, he constantly surprises, pushing things just a little further in either direction.... Though God may have forsaken [these characters], Scott does not. The World Doesn’t Require You is full of horrible, ridiculous people, but it’s full of grace, too." — Bradley Babendir, A.V. Club

"Rich and extraordinary.... Scott, whose 2016 debut collection, Insurrections, introduced readers to Cross River, has created a fictional mini-world so detailed that, for all its surreality, you begin to feel you could draw it on a map. But what he’s also tracing here is a history of oppression — and not just in the slavery that Cross River’s 19th-century founders escaped with their successful revolt, known as the Insurrection. The persistence of racism in American culture is central, but other entrenched forms of domination are here, too: the toxic hierarchies that humans, even those fleeing their own subjugation, so dependably replicate." — Laura Collins-Hughes, Boston Globe

"Rion Amilcar Scott doesn’t hold back or tiptoe around issues about race. He’s the most courageous writer I know; and this collection is an excellent example and significant achievement. He’s now made his mark as a force to reckon with." — Nicole Dennis-Benn, author of Patsy

"Scott’s signature blend of tenderness and world-weary wise-cracking and magical realism buoys the reader with strength and a deeply intelligent hope. You won’t find Cross River on any map, but its people and their stories are real and solid and demand to be heard." — Cari Luna, author of The Revolution of Every Day

"I've been a fan of Rion Amilcar Scott's for years, but I was astonished by The World Does Not Require You, which seems a leap into a blazing new level of brilliance: it is a wild, restless, deeply intelligent collection of stories, each of which resists and subverts the limits of categorization. What a beautiful book." — Lauren Groff, author of Florida and Fates and Furies

"Scott’s bold and often outlandish imagination makes for stories that may be difficult to define, but whose emotional authenticity is never once in doubt." — Publishers Weekly [starred review]

"Each time I open to a passage I love, I think this man is a national treasure of a writer… What brilliance between the pages." — Jacqueline Woodson, author of Another Brooklyn and Brown Girl Dreaming

"Surreal, intertextual, and darkly comical stories... Rion Amilcar Scott writes in the tradition of George Schuyler and Ishmael Reed but with a distinctive wry, playful voice that is wholly his own. With breathtaking cruelty and devastating humor, Scott adduces the whole world in one community." — Nafissa Thompson-Spires, author of Heads of the Colored People

"The World Doesn't Require You is a wholly inventive, mesmerizing, genre-bending whirlwind of a book. I am utterly blown away by Rion Amilcar Scott's boundless talent and imagination." — Jami Attenberg, author of All Grown Up

"In the midst of a renaissance of African American fiction, Rion Amilcar Scott's stories stand at the forefront of what's possible in this vanguard. Funny, sad, and always moving, these stories explore what it means to call a place like America home when it treats you with indifference or terror. The people in these stories are unforgettable, their lives recognizable, their voices, as written by Scott, wholly original." — Kaitlyn Greenidge, author of We Love You, Charlie Freeman

"Flat-out unputdownable. The fictional town of Cross River, MD sits at the heart of this dazzling collection—home to water-women and a wayward lecturer secretly dwelling in the basement of a university building and the last son of god, to myth and wonder and sorrow. With these innovative, refreshing, and altogether thrilling stories, Rion Amilcar Scott once again shows his readers that he is a blazingly original talent, a vital voice." — Laura van den Berg, author of The Third Hotel

"This soaring collection firmly places Cross River within the canon of American literature and confirms Scott as one of the most unique, powerful writers of his generation. We are so lucky." — Randa Jarrar, author of Him, Me, Muhammad Ali: Stories