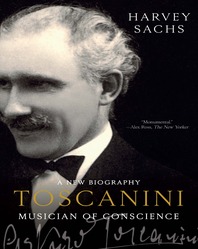 On the 150th anniversary of his birth comes this monumental biography of conductor Arturo Toscanini, whose dramatic life was unparalleled among twentieth-century musicians.

Arturo Toscanini (1867–1957) was famed for his dedication, photographic memory, explosive temper and impassioned performances. At times he dominated La Scala, the Metropolitan Opera, the New York Philharmonic, and the Bayreuth, Salzburg and Lucerne festivals. His reforms influenced generations of musicians, and his opposition to Nazism and Fascism made him a model for artists of conscience. With unprecedented access to the conductor’s archives, Harvey Sachs has written a new biography positioning Toscanini’s musical career and sometimes scandalous life against the currents of history. Set in Italy, across Europe, the Americas and in Palestine, with portraits of Verdi, Puccini, Caruso, Mussolini and others, Toscanini soars in its exploration of genius, music and moral courage.

“'Monumental’ is surely the mot juste to describe the book’s length... but equally the combination of thoroughness, clarity, psychological perspicacity and deep human feeling which distinguishes every page... for all its massiveness the book proves unputdownable.” — BBC Music Magazine

“Harvey Sachs has written the definitive biography of this great, and colourful, character... [His] writing style is precise, fluent and gripping... As a study of the life and times of one of the greatest conductors of all time, this book will not soon be bettered.” — The Economist

“It is without doubt the most engaging, the best-written and certainly the most comprehensive Toscanini biography yet to be published...” — Gramophone

“... magnificent biography... To read about him [Toscanini] at this length—and there will surely be no need for another biography—is to be simultaneously inspired and bewildered.” — The Spectator

“This book of more than 900 pages, full of personal recollections and testimony... is vastly comprehensive, balanced and indispensable... Sachs’ own dedication to this force of nature has been fulfilled in a book which ranks among the best of 2017.” — Classical Music

“Drawing on a wide range of new evidence, including unknown letters and the archives of many of the opera houses that Arturo Toscanini worked with, including La Scala, Harvey Sachs has written a weighty and highly enjoyable account of one of the greatest conductors, a man still renowned for his pursuit of perfection.” — Books of the Year 2017, The Economist

“Harvey Sachs has provided a compendious chronicle of Toscanini's astonishing achievement across almost a century, and it makes for compelling reading.” — Times Literary Supplement

“I am currently reading two excellent books: the new Harvey Sachs biography of one of the finest conductors of all time – Arturo Toscanini...” — Something for the Weekend - Finghin Collins' Cultural Picks, RTÉ

“Extraordinary... Indeed, I cannot think of another biography of a classical musician to which it can be compared: in its breadth, scope, and encyclopedic command of factual detail it reminds me of nothing so much as Robert A. Caro’s The Power Broker... Never before has [this] history been told so well.” — Tim Page, The New York Review of Books

“A very engaging and at times gripping chronicle of music and society, all of it devoted to the unending drive and conscientiousness that made Toscanini’s performances so riveting—and, to some, so repellent... What comes through in Sachs’s long chronicle is the extent of Toscanini’s role, witting and unwitting, in transforming the way that classical music was produced and consumed in the twentieth century.” — David Denby, The New Yorker

“Sachs’s account is persuasive and compelling in the important ways... Today, Toscanini is receding from our consciousness, notwithstanding his many records... Creative geniuses can survive for centuries, even millenniums; interpreters inevitably go over the cultural cliff. But that doesn’t detract from the crucial—the central—role Toscanini played in our musical culture for well over 60 years. Nor from the almost universal regard he was held in as a man.” — Robert Gottlieb, The New York Times Book Review