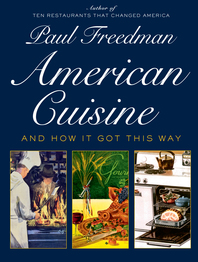 With a sweep of more than 200 years, this lavishly illustrated history convinces us that there actually is an American cuisine.

For decades, many have doubted the existence of American cuisine, believing that hamburgers, hot dogs and pizza define the nation’s palate. Not so, says leading food historian Paul Freedman. Freedman traces the twentieth-century rise of processed food, standardisation and fast-food restaurants. With the farm-to-table movement, a culinary revolution has transformed the way Americans eat. Whether analysing how businesses and advertisers used seduction and guilt to dictate women’s food-shopping habits, exploring how class determines what Americans eat or documenting the contributions provided by immigrants, Freedman reveals an astonishing history.

“In American Cuisine, Paul Freedman embarks on an epic quest, to locate the roots of American foodways and follow changing tastes through the decades, a search that takes him straight to the heart of American identity. It is an enormous, endlessly fascinating subject, and Freedman makes a wonderful tour guide, scholarly and wry.” — William Grimes, former New York Times restaurant critic

“This fascinating book delves into American cuisine with gusto.” — Choice