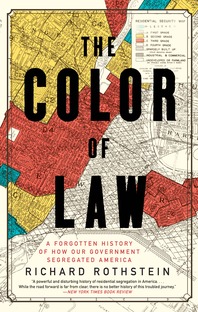 Widely heralded as a “masterful” (The Washington Post) and “essential” (Slate) history of the modern American metropolis, Richard Rothstein’s The Color of Law offers “the most forceful argument ever published on how federal, state, and local governments gave rise to and reinforced neighborhood segregation” (William Julius Wilson). Exploding the myth of de facto segregation arising from private prejudice or the unintended consequences of economic forces, Rothstein describes how the American government systematically imposed residential segregation: with undisguised racial zoning; public housing that purposefully segregated previously mixed communities; subsidies for builders to create whites-only suburbs; tax exemptions for institutions that enforced segregation; and support for violent resistance to African Americans in white areas. A ground-breaking, “virtually indispensable” (Chicago Daily Observer) study that has already transformed our understanding of twentieth-century urban history, The Color of Law is forcing Americans to face the obligation to remedy their unconstitutional past.

• A The New York Times bestseller

"Essential… Rothstein persuasively debunks many contemporary myths about racial discrimination. Only when Americans learn a common—and accurate—history of our nation’s racial divisions, he contends, will we then be able to consider steps to fulfill our legal and moral obligations. For the rest of us, still trying to work past 40 years of misinformation, there might not be a better place to start than Rothstein’s book." — Rachel M. Cohen, Slate

"A powerful and disturbing history of residential segregation in America... One of the great strengths of Rothstein’s account is the sheer weight of evidence he marshals... While the road forward is far from clear, there is no better history of this troubled journey than The Color of Law." — David Oshinsky, The New York Times Book Review

"There’s a really important book that came out... called The Color of Law. It explains how a lot of the racial segregation taking place in our neighborhoods that we maybe treat today as de facto actually happened as the result of very specific and very racist policy choices, going back at least to the F.D.R. Administration. You would think it would make sense if resources went into creating that racial inequity that resources would go into reversing it." — Pete Buttigieg