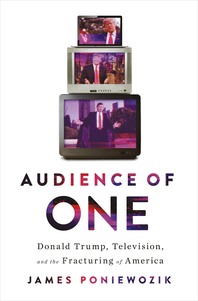 Using television Audience of One reframes America through the rattled mind of a septuagenarian, insomniac, cable-news-junkie president.

The New York Times chief television critic James Poniewozik traces the history of television and mass media from the early 1980s to today and demonstrates how a “volcanic, camera-hogging antihero” merged with America’s most powerful medium to become the forty-fifth president. He charts the seismic evolution of television from a monolithic mass medium of mainstream networks into today’s fractious media subculture. He then examines Donald Trump, who took advantage of these changes to reinvent himself: from boastful cartoon zillionaire; to 1990s self-parodic sitcom fixture; to The Apprentice-reality-TV star to Twitter-mad, culture-warring demagogue. A trenchant, often hilarious work, Audience of One provides an eye-opening history of American media and a reflection of a raucous, “gorillas-are always-fighting” culture.

“The Mueller Report of television criticism! James Poniewozik’s Audience of One is both damning and illuminating, a witty, penetrating exposé of Trump’s most intimate relationship, the one with the medium that made him.” — Emily Nussbaum, television critic for The New Yorker

“With wit, insight, and clarity, James Poniewozik puts Trump at the center of a series of changes that swept through American popular culture and political systems. Poniewozik’s essential book shows how these evolutions incubated Trumpism, even as Trump’s rise exposed the limits and vulnerabilities of the media, which too often found itself floundering in the face of his shameless manipulations.” — Maureen Ryan, chief TV critic for Variety

“Illuminating... Poniewozik is a funny, acerbic and observant writer… [He] uses his ample comedic gifts in the service of describing a slow-boil tragedy. If humor is the rocket of his ICBM, the last three years of our lives are the destructive payload... Poniewozik brings a new microscope with which to analyze the drug-resistant bacterium that is our president. Perhaps the greatest accomplishment of Audience of One is that it makes Trump's presidency seem almost inevitable.” — Gary Shteyngart, The New York Times Book Review