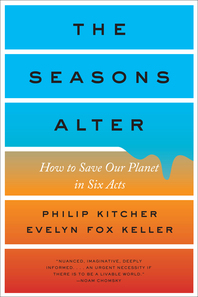 A landmark work of environmental philosophy that seeks to transform the debate about climate change.

In November 2015, the world powers came together in Paris with the hope of reaching an agreement on the most urgent issue of our time: climate change. While it was an historic moment that brought solutions within the realm of possibility, the obstacles to enacting real revolution were still many. Now, confronting these controversies head-on, two scholars use a series of ground-breaking arguments to frame the problem in human terms, showing us how vested interests have been able to control the conversation, tracing a line of reasoning that will break through the seemingly impenetrable barriers of political obfuscation. This watershed book evokes the battle cries of Naomi Klein and the exigency of Rachel Carson, laying the groundwork for a path to environmental salvation.

“Philosophers of science Philip Kitcher and Evelyn Fox Keller call for constructive discourse on climate change in their unusual exploration of this urgent, highly politicized issue. While coherently explaining the science, they use Socratic dialogue to explore differing viewpoints.” — Mary Craig, Highlights of the Season’s Releases, Nature