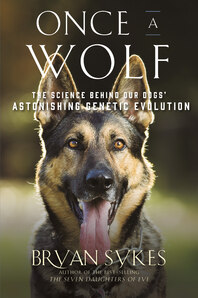 The author of Seven Daughters of Eve returns with a lively account of how all dogs are descended from a mere handful of wolves.

How did wolves evolve into dogs? When did this happen, and what role did humans play? Oxford geneticist Bryan Sykes used the full array of modern technology to explore the canine genetic journey that likely began when a human child decided to adopt a wolf cub thousands of years ago. In the process, he discovered that only a handful of genes have created the huge range of shapes, sizes, and colors in modern dogs. Providing scientific insight into these adaptive stages, Sykes focuses attention on our own species, and how our own evolution from (perhaps equally aggressive) primates was enhanced by this most unlikely ally. Whether examining our obsession with canine purity, or delving into the prehistoric past to answer the most fundamental question of all, “Why do we love our dog so much?,” Once a Wolf is an engaging work no dog lover or ancestry aficionado should be without.

“How did wolves evolve into dogs? Persuasively... Sykes reviews the state of the art on matters canine and lupine. Scientifically inclined dog lovers will find this a trove of information and provocation.” — Kirkus Reviews

“Rich with details about how humans have studied and shaped dog evolution.... Sykes also has a gift for rendering complex concepts, such as mitochondrial DNA or genetic microsatellites, accessible to lay readers.” — Publishers Weekly

“Reading this is like having your own personal geneticist explain complex research papers in a way that is both comprehensible and fascinating. Heavily peppered with references to scientific papers that have documented the research on dog genetics, this also serves as a wealth of further reading material. Rich in accessible analogies that deftly explain complex scientific concepts, this is a must-read for anybody who has wondered about the origins of humans' best friend.” — Library Journal

“In prose both scientific and poetic, geneticist and author (DNA USA, 2012) Sykes, self-described as "not a dog person" but curious about the parallel evolution of dog and human, takes us through the archaeological, paleontological, behavioral, and genetic evidence pinpointing the transformation of wolf to dog. . . Woven throughout are possible answers to why humans are so in love with their dogs, making for a warmly engaging popular-science read.” — Nancy Bent, Booklist