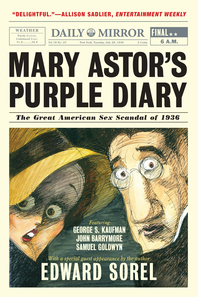 An hilarious send-up of sex, scandal and the Golden Age of Hollywood by a legendary cartoonist.

In 1965, a young, up-and-coming illustrator by the name of Edward Sorel tore away layer after layer of linoleum from the floor of his $97-a-month Manhattan apartment until he discovered a hidden treasure: issues of The New York Daily News and the Mirror from 1936, each ablaze with a scandalous child custody trial taking place in Hollywood starring the actress Mary Astor—and the journal in which she detailed her numerous affairs. Thus began a half-century obsession that reached its peak in Mary Astor’s Purple Diary, “a thoroughly charming” (The New York Times Book Review/) account of the scandal in which Sorel narrates and illustrates the travails of the Oscar-winning actress alongside his own personal story of discovering an unlikely muse.

Now in a stunning paperback, featuring more than sixty ribald and rapturous original illustrations, Mary Astor’s Purple Diary is the life’s masterpiece of one of America’s greatest illustrators.