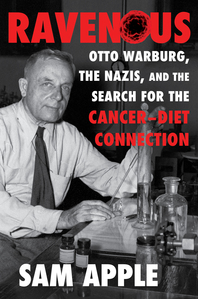 The extraordinary story of the Nazi-era scientific genius who discovered how cancer cells eat—and what it means for how we should.

The Nobel laureate Otto Warburg was widely regarded as one of the most important biochemists of the twentieth century. A Jewish homosexual living openly with his partner, he was also among the most despised figures in the Third Reich. Yet top Nazi officials—perhaps even Hitler himself—dreaded cancer and protected Warburg in the hope he could cure it.

Using new archival sources and interviews with current cancer authorities, Sam Apple depicts a relentless figure, hungry for fame, who pursued his research even as the world around him disintegrated. Remarkably, Warburg’s theory about the metabolic origins of cancer has been revived in our own time, as scientists investigate the dangers of sugar and the link between obesity and cancer. Ravenous is a book for readers of Alan Turing and The Emperor of All Maladies: a tale of scientific discovery, personal peril and the race to end a disastrous disease.