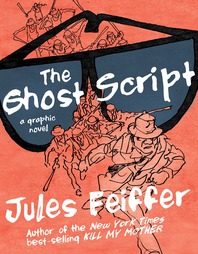 Never has the incomparable Jules Feiffer been more eerily prophetic than in this stunning finale to his best-selling Kill My Mother trilogy.

Jules Feiffer delivers the tour de force of his illustrious career in this epic finale. In The Ghost Script, he plunges us into the blowzy, boozy world of Blacklist Hollywood, circa 1953: witch hunts, Reds, pinkos, starlets and a mysterious, orchid-growing mastermind, the renamed “Cousin Joseph”, running a back-channel clearing house for victims of the entertainment world’s purge. Stumbling his way through this maze is private eye Archie Goldman, a tough-talking good guy, always a step or two behind, in this story of plots, counterplots and goon violence. In this satiric assault on America’s past and present, Feiffer shows how the arc of history evolves from starry dreams to thwarted and sold-out dreams.

“Feiffer is a master of sequential art and he takes us effortlessly on a story of betrayal and revenge with plenty of twists to the plot to keep the tempo fast moving and totally engrossing. The characters are created with both empathy and insight that ensures they keep our attention and the plot stays believable.” — Gnash Comics

“Eighty-nine-year-old Jules Feiffer is a comics legend, and The Ghost Script proves that age is just a number when it comes to telling a compelling story... Feiffer’s skill at juggling noir tropes with real-world Hollywood history is fascinating… he hits every twisted beat, enlists and skewers every stereotype, and employs his trademark drawing style to excellent effect – there’s a fluidity to every character, a subtlety that proves you don’t have to fill in every detail of a face and body to make the subject come alive on the page.” — Starburst

“This is a vibrant, speedy and, yes, at times angry, account of the McCarthy era in Hollywood circa 1953, a mix-up of private eyes, pinko writers, Union goons and right-wing loons.” — The Herald

“Less emotionally stressful, though with deep seriousness lurking beneath its shrewd wit and artistic energy, is Jules Feiffer’s The Ghost Script ... the third in a trilogy of graphic novels by a veteran cartoon satirist (Feiffer is 89). In straggly, super-vivid monotone art, it pays homage to the Spirit comics of Will Eisner, whom Feiffer once assisted, and the PI stories of mid-century Hollywood.” — Tim Martin, The Spectator

“... a mark of Feiffer’s mastery is that everything seems inevitable once it has happened. It’s convincing genre fiction.” — New Statesman