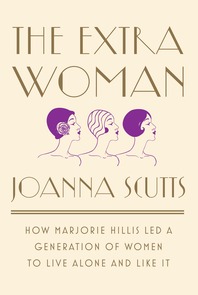 From the flapper to The Feminine Mystique, a cultural history of single women in the city through the reclaimed life of glamorous guru Marjorie Hillis.

The Extra Woman transports us to the turbulent and transformative years between suffrage and the sixties, when, thanks to the glamorous grit of one Marjorie Hillis, single women boldly claimed and enjoyed their independence. Gone were the days of the flirty flapper; ladies of Depression-era New York embraced a new icon: the independent working woman. Hillis was already a success at Vogue when she published a radical self-help book in 1936: Live Alone and Like It: A Guide for the Extra Woman. With Dorothy Parker–esque wit, she urged spinsters, divorcée and “old maids” to shed derogatory labels and take control of their lives, and her philosophy became a phenomenon.

In a style as irresistible as Hillis’s own, Joanna Scutts explores the revolutionary years following the Live-Alone movement, when the status of these “brazen ladies” peaked and then collapsed. By painting the wider picture, Scutts reveals just how influential Hillis’s career was, spanning decades and numerous best sellers. As she refashioned her message with every life experience, Hillis proved that guts, grace and perseverance would always be in vogue.

“The Extra Woman follows Hillis’ own fascinating life as a 'Live Aloner' against a wider backdrop of what life was like for single women between getting the vote and getting the Pill. A fascinating read.” — Red Magazine

“Scutts’s book, written with an enticing no-nonsense clarity that is reminiscent of Hillis’s original, acts as both a biography of Hillis and paints a fascinating portrait of the cultural context surrounding her work.” — The National