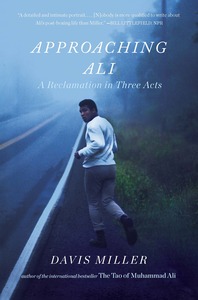 The single most intimate look at Muhammad Ali’s life after boxing, told through the story of an unexpected friendship.

In 1988, then struggling writer Davis Miller drove to Muhammad Ali’s mother’s modest Louisville house, knocked on the door and introduced himself to his childhood idol. Nearly thirty years later, the two friends have an uncommon bond, the sort that can be fashioned only in serendipitous ways and fortified through shared experiences. Miller now draws from those remarkable moments to give us a beautifully written portrait of a great man physically devastated but spiritually young—playing tricks on unsuspecting guests, performing sleight of hand for any willing audience and walking ten miles each way to get an ice cream. Following in the tradition of writers such as Gay Talese and Nick Hornby, Miller gives us a series of extraordinary stories that coalesce to become a moving introduction to the human side of a boxing legend.

“[Miller's] new book gives you an intimate glimpse of Tragic Ali: a man of once-uncontainable animation now locked behind facial features that do not move 'one-tenth of an inch'.” — Financial Times