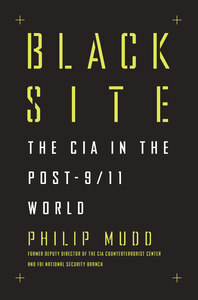 A bold account of one of the most controversial and haunting initiatives in American history, Black Site tells the full story of the post-9/11 counterterrorism world at the CIA.

On 9/11 the CIA changed. Once a organisation focused on information gathering, it became a militarised force. As Philip Mudd explains, at that time, came a different breed of prisoner, one who wanted to die but held information that could save thousands of lives. Out of this emerged what was referred to internally as “The Program”: a world web of secret detention centres that used “enhanced interrogation tactics”.

A 2014 US Senate report exposed horrifying details from this “Program” but there were no details as to how officials came to their decisions, what happened daily at these “Black Sites” and how the officers felt about what they were doing. Mudd weaves stunning research, new interviews and his own account to illuminate the CIA at this most difficult time.