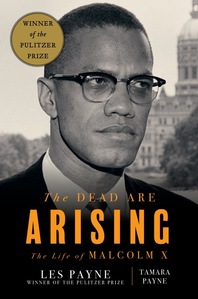 Les Payne, the renowned Pulitzer Prize–winning investigative journalist, embarked in 1990 on a nearly thirty-year-long quest to interview anyone he could find who had actually known Malcolm X—all living siblings of the Malcolm Little family, classmates, street friends, cellmates, Nation of Islam figures, FBI moles and cops, and political leaders around the world. His goal was ambitious: to transform what would become over a hundred hours of interviews into an unprecedented portrait of Malcolm X, one that would separate fact from fiction.

The result is this historic biography that conjures a never-before-seen world of its protagonist, a work whose title is inspired by a phrase Malcolm X used when he saw his Hartford followers stir with purpose, as if the dead were truly arising, to overcome the obstacles of racism. Setting Malcolm’s life not only within the Nation of Islam but against the larger backdrop of American history, the book traces the life of one of the twentieth century’s most politically relevant figures “from street criminal to devoted moralist and revolutionary.”

In tracing Malcolm X’s life from his Nebraska birth in 1925 to his Harlem assassination in 1965, Payne provides searing vignettes culled from Malcolm’s Depression-era youth, describing the influence of his Garveyite parents: his father, Earl, a circuit-riding preacher who was run over by a street car in Lansing, Michigan, in 1929, and his mother, Louise, who continued to instill black pride in her children after Earl’s death. Filling each chapter with resonant drama, Payne follows Malcolm’s exploits as a petty criminal in Boston and Harlem in the 1930s and early 1940s to his religious awakening and conversion to the Nation of Islam in a Massachusetts penitentiary.

With a biographer’s unwavering determination, Payne corrects the historical record and delivers extraordinary revelations—from the unmasking of the mysterious NOI founder “Fard Muhammad,” who preceded Elijah Muhammad; to a hair-rising scene, conveyed in cinematic detail, of Malcolm and Minister Jeremiah X Shabazz’s 1961 clandestine meeting with the KKK; to a minute-by-minute account of Malcolm X’s murder at the Audubon Ballroom.

Introduced by Payne’s daughter and primary researcher, Tamara Payne, who, following her father’s death, heroically completed the biography, The Dead Are Arising is a penetrating and riveting work that affirms the centrality of Malcolm X to the African American freedom struggle.

“Malcolm’s presence is beautifully rendered...Nobody has written a more poetic account...Payne also shows how enthralling it was to watch Malcolm improvise and argue. In this scene and others, we are exposed to Malcolm’s teachings within the rhythm of Payne’s masterly storytelling.” — Michael P. Jeffries, New York Times Book Review

“Masterfully, [Payne] wove together the memories of friends, family, acquaintances, informants, and adversaries into a rich tapestry from which emerges the portrait of a complex individual working to make change in a society also full of contradictions. The book, which ultimately took more than three decades to produce, was completed after Payne’s 2018 death by his daughter and primary researcher, Tamara Payne, who also contributed the book’s introduction...[Payne's] meticulous recovery of Malcolm’s youth adds a new dimension to Malcolm’s less familiar 'origins story'....By giving a second life to a historical Malcolm, Les Payne’s timely biography illustrates something really important. It reminds us that those making history often do so by having the courage and conviction to act in spite of their limitations; their legacy can survive and continue to inspire even the deconstruction of the myths we build around them or the ones they construct themselves.” — Yohuru Williams, Boston Globe

“Payne frequently revises or expands the historical record, offering the most detailed new account of Malcolm’s early years; the clearest argument yet (with new sources) that Earl Little, Malcolm’s father, died in an accident and not in a racist murder; the revelation that Shorty (the friend played by Spike Lee in the movie) is actually a composite; a deep dive into Malcolm’s ill-advised meeting with the Ku Klux Klan; and intriguing specifics on the assassination and its aftermath.” — Stuart Miller, Los Angeles Times

“Masterful... The Dead Are Arising is a meticulously researched, compassionately rendered, and fiercely analytical examination of the radical revolutionary as a human being.” — Kerri Greenidge, The Atlantic

“The Dead Are Arising, a new biography of Malcolm X, is timely. But perhaps this sobering book’s clearest message is that it will always be timely, because the story it narrates is timeless.... Les and Tamara Payne are especially good in detailing these early years of delinquency and rebirth. Like Robert Caro’s life of Lyndon Johnson, The Dead Are Arising delves deeply into the wider context of Malcolm’s world.... The book shows better than any previous biography the extent to which the NOI’s outlook was rooted in Marcus Garvey’s ‘Back to Africa’ movement of the 1920s.... Malcolm was uneasy about sitting down with white supremacists, but he’d been ordered to do so by ‘the Messenger’ Elijah Muhammad.... The encounter, covered in a riveting 63-page chapter that’s based on a wealth of new evidence, is the Paynes’ showstopper.” — Andrew Preston, The Spectator

“The Dead Are Arising sets out to provide a much fuller picture of the life and death of Malcolm X, drawing on interviews with his friends and family to assess his contribution in the context of the times. The book is based on decades of painstaking research by Les Payne, who died before it was completed, and his daughter Tamara.... It is as much a history of US race relations as it is a biography of the black revolutionary.... The Dead Are Arising rightly sees Malcolm’s split from the cult-like Nation of Islam as inevitable, given the organisation’s reactionary political stances.” — Kehinde Andrews, The Guardian

“[The Dead Are Arising is] the most lyrical and complete biography of this uniquely brilliant American ever written. This book is a great read, full of original insights about an elusive figure rendered deeply human.” — David Blight, author of the Pulitzer Prize–winning Frederick Douglass: Prophet of Freedom

“Monumental. . . Payne’s richly detailed account is based on hundreds of interviews with Malcolm X’s family members, childhood friends, cellmates, allies, and enemies, and meticulously tracks his journey from Omaha. . . to his emergence as the Nation of Islam’s ‘most gifted and successful proselytizer and demander of justice,’ and his assassination in 1965. Along the way, Payne folds in incisive portraits of [major] figures. . . An extraordinary and essential portrait of the man behind the icon.” — Library Journal, starred review

“Comprehensive, timely life of the renowned activist and his circuitous rise to prominence. . . . Payne delivers considerable news not just in recounting unknown episodes of Malcolm’s early years, but also in reconstructing events during his time as a devotee of Nation of Islam leader Elijah Muhammad . . . Payne’s accounts of the consequences that rupture and Malcolm’s assassination at the hands of a ‘goon squad’ with ties to the FBI and CIA are eye-opening, and they add a new dimension to our understanding of Malcolm X’s last years. . . . A superb biography and an essential addition to the library of African American political engagement.” — Kirkus Reviews, starred review

“Pulitzer winner Payne (1941–2018) spent nearly 30 years researching and writing this monumental biography of human rights activist Malcolm X. Completed by his daughter and researcher, Payne’s richly detailed account is based on hundreds of interviews with Malcolm X’s family members, childhood friends, cellmates, allies, and enemies, and meticulously tracks his journey from Omaha, Neb., where he was born Malcolm Little in 1925, through his teenage pot dealing in East Lansing, Mich., and street criminal days in Boston and Harlem, to his emergence as the Nation of Islam’s “most gifted and successful proselytizer and demander of justice,” and his assassination in 1965. Along the way, Payne folds in incisive portraits of such major figures as Marcus Garvey, whose teachings on racial uplift Malcolm X’s parents followed; Moorish Science Temple leader Noble Drew Ali, whose follower, Fard Muhammad, founded the Nation of Islam; and civil rights leader Martin Luther King Jr. Payne also documents the radio dramas and jazz music Malcolm X listened to, reveals how a clandestine meeting with the Georgia Ku Klux Klan in 1961 contributed to his break from the Nation of Islam, and interviews two men wrongly imprisoned for his murder. The result is an extraordinary and essential portrait of the man behind the icon.” — Publishers Weekly, starred review

“Monumental and absorbing... peers into the gaps left by Malcolm X’s autobiography, taking us more deeply into the intimate details of his life, work and death. In vivid detail, Payne retells the events leading up to Malcolm X’s assassination, offering fresh information about those involved. The Dead Are Arising is essential reading.... captur[ing] the vibrant voice of a revolutionary whose words resonate powerfully in our own times.” — Henry L. Carrigan Jr., BookPage, starred review

“Meticulously researched and masterfully reported, this chronicle offers fresh insights and disturbing revelations that, among other things, strengthen the case for government complicity in the murder of Malcolm X. . . . A gripping read . . . [and] a worthy companion to Malcolm’s famed autobiography.” — Nathan McCall, author of Makes Me Wanna Holler: A Young Black Man in America

“The Dead Are Arising. . . will become the definitive biography of Malcolm X.” — Ray Winbush, director of the Institute for Urban Research at Morgan State

“A brilliant and indispensable depiction of the life of Malcolm X. . . . Using the fruits of decades of interviews, [Payne] brings new information and perspectives on one of the most fascinating, and often misunderstood, figures in American history.” — Annette Gordon-Reed, author of The Hemingses of Monticello, winner of the Pulitzer Prize

“The result of nearly three decades of investigative reporting, The Dead Are Arising is an essential new biography of one of the most compelling political figures of the twentieth century.” — Jill Lepore, author of These Truths

“No one who wishes to reckon with the life of this man, one of the most important African American figures of the twentieth century can afford to forgo this account.” — Howard W. French, Columbia University