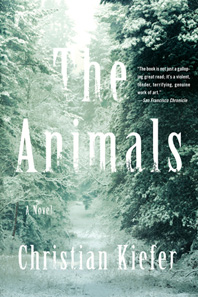 Alternating between the past and the present, The Animals builds powerfully towards the revelation of a character-defining betrayal.

Bill Reed manages a wildlife sanctuary in rural Idaho, caring for injured animals unable to survive in the wild—raptors, a wolf and his beloved bear, Majer, among them. He hopes to marry the local vet and live a quiet life, until a childhood friend is released from prison and threatens to reveal Bill’s darkest secrets. Suddenly forced to confront his criminal past, Bill battles fiercely to preserve both the shelter and his hard-won new identity.