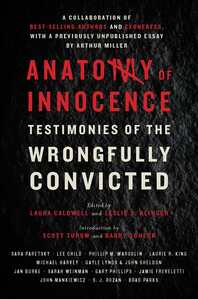 Recalling the great muckrakers of the past, an outraged team of best-selling writers unite to confront the disasters of wrongful convictions.

Long thought to be statistical anomalies in an otherwise sound justice system, wrongful convictions—we are just beginning to learn—happen with frightening regularity. But very few people understand just how they happen and, more importantly, the consequences. Now, Anatomy of Innocence tells the stories of more than a dozen innocent men and women who were convicted of serious crimes and cast into the maw of a vast and deeply flawed American criminal justice system before eventually being exonerated. Here, each “exoneree” is paired with a high-profile mystery and thriller writer to produce a unique collaboration. By joining such master storytellers with exonerees, Anatomy of Innocence presents the tragedy of wrongful conviction with a stark and fiery clarity.

"... the decision to offer these stories of wrongful conviction as thrillers is also a way to translate abstract social reform arguments into stories with momentum and pulse... the siren call seductions of compelling narrative and gripping situations leave in their wake the deep, queasy aftertaste of morally useful unease; the sense that the status quo is deeply broken." — Times Literary Supplement