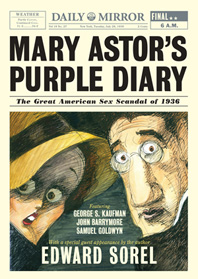 Mary Astor’s Purple Diary is a passion project that becomes the masterpiece of one of America’s greatest illustrators.

In 1965, the young illustrator Edward Sorel discovered a treasure in his railroad flat on Manhattan’s Upper East Side: issues of the New York Daily News and Daily Mirror from 1936 ablaze with a trial taking place in Hollywood. Mary Astor was enough of a star to make headlines when it came out that George S. Kaufman, then the most successful playwright on Broadway and a married man, had been her lover. The scandal revolved around Mary’s diary which her ex-husband had found. Its contents forced her to give up custody of their daughter in order to obtain a divorce. Mary, he claimed, had not only kept a tally of all her extramarital affairs but graded them—and he had alerted the press. Mary Astor’s Purple Diary narrates and illustrates the travails of the Oscar-winning actress alongside Sorel’s own story of discovering an unlikely muse.