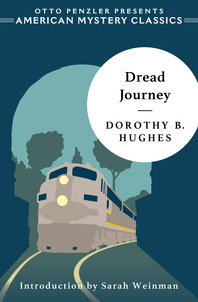 Hollywood big-shot Vivien Spender has waited ages to produce the work that will be his masterpiece: a film adaptation of Thomas Mann’s The Magic Mountain. He’s spent years grooming young starlets for the lead role, only to discard each one when a newer, fresher face enters his view. Afterwards, these rejected women all immediately fall from grace; excised from the world of pictures, they end up in rehab, or jail, or worse. But Kitten Agnew, the most recent to encounter this impending doom, won’t be gotten rid of so easily—her contract simply doesn’t allow for it. Accompanied by Mr. Spender on a train journey from Los Angeles to Chicago, she begins to fear that the producer might be considering a deadly alternative. Either way, it’s clear that something is going to happen before they reach their destination, and as the train barrels through America’s heartland, the tension accelerates towards an inescapable finale.

Reprinted for the first time in over twenty years, Dread Journey is a taut thriller that exemplifies Dorothy B. Hughes’s greatest strengths as a writer—namely, her sharpened prose and mastery of psychological suspense. While its fine-tuned plot is just as exciting as it was in 1945, when the novel was first published, and its portrayal of Hollywood’s less savory elements remains all-too-relevant today, the book’s characters and setting provide pure Golden Age fare, sure to please any devotee of classic mystery novels.

“The perfect in-flight read. The only thing that’s dated is the long-distance train.” — Kirkus

“Every sentence is suffused with dread.” — Los Angeles Review of Books

“Not to be missed under any circumstances.” — Anthony Boucher

Also By: Dorothy B. Hughes