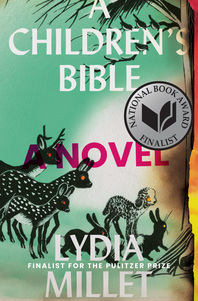 A brilliant, indelible novel of teenage alienation and adult complacency in a world whose climate and culture are unravelling.

Pulitzer Prize finalist Lydia Millet’s sublime new novel—her first since the National Book Award–longlisted Sweet Lamb of Heaven— follows a group of eerily mature children on a forced vacation with their parents at a lakeside mansion. Contemptuous of their elders, who pass their days in a hedonistic stupor, the children are driven out into a chaotic landscape after a great storm descends. The story’s narrator, Eve, devotes herself to the safety of her beloved little brother as events around them begin to mimic scenes from his cherished picture Bible.

Millet, praised as “unnervingly talented” (San Francisco Chronicle), has produced a heartbreaking story of the legacy of climate change denial. Her parable of the coming generational divide offers a lucid vision of what awaits us on the other side of Revelation.

“An American author steps out of the shadows with a dystopian novel of great power.” — Adam Begley, The Sunday Times

“The pandemic amplifies the resonance of this brilliant end-of-days escapade… if the conclusion doesn’t leave you with goosebumps, then you should probably check your pulse.” — Stephanie Cross, The Daily Mail

“New England children caught up in an apocalyptic storm have to fend for themselves in this powerful novel by a talented American writer who has often flown under the literary radar.” — 100 best holiday reads, The Sunday Times

“A perfect novel for now.” — Metro