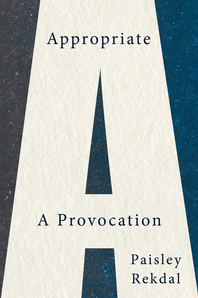 A timely, nuanced work that dissects the thorny debate around cultural appropriation and the literary imagination.

How do we properly define cultural appropriation and is it always wrong? If we can write in the voice of another, should we? And if so, what questions do we need to consider first? In Appropriate, creative writing professor Paisley Rekdal addresses a young writer to delineate how the idea of cultural appropriation has evolved—and perhaps calcified—in our political climate. Rekdal examines the debate between appropriation and imagination, exploring the ethical stakes of writing from the position of a person unlike ourselves.

What follows is a penetrating exploration of fluctuating literary power and authorial privilege, about whiteness and what we really mean by the term “empathy”. Rekdal offers a study of techniques, both successful and unsuccessful, that writers from William Styron to Peter Ho Davies to Jeanine Cummins have employed to create characters outside their own identities. Lucid, reflective and astute, Appropriate presents a generous new framework for one of the most controversial subjects in contemporary literature.

"Questions of cultural appropriation often crystallize most acutely in works of literature, from William Styron to Jeanine Cummins. Rekdal, a writing teacher, parses the issue to ask who is “allowed” to write what, and in what contexts." — New & Noteworthy, The New York Times

"Creative writing professor Paisley Rekdal tackles the definition of cultural appropriation and how it fits into our current political climate in her collection of essays, structured as a series of letters to an imagined student. Rekdal picks apart the hotly debated topic of who gets to tell what story as she examines the evolution of cultural appropriation as it pertains to literature. In her scrutinization of authorship, Rekdal points to bigger questions surrounding whiteness, identity and empathy." — 14 New Books You Should Read in February, Time

"[Rekdal] speaks without condescension to young, ethically conscious writers, and with an awareness that anti-racism is necessarily a constant, ever-shifting struggle; those who presume to have all the answers have got the question wrong." — Bad Form Magazine