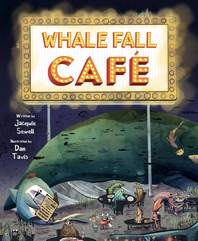 One medium-size whale carcass delivers as much food to the dark, cold ocean depths as 4,000 years of sinking food particles. When a dead whale arrives, the café opens for business, and who better than Dan Tavis to show us the bizarre deep-ocean diners who show up?

Hagfish, zombie worms, sleeper sharks—this group of patrons is stranger than the denizens of the Mos Eisley Cantina in Star Wars. A fish in a lab coat, piloting a deep-sea submersible, is our guide to the weirdly fascinating goings-on miles beneath the ocean surface.

"Where do whales go when they die? Down. As they make their ponderous descent to the ocean floor, fish nibble at the passing repast. And when they hit bottom, much worse for wear, the benthic creatures that usually subsist on the flakes of decomposed matter that drift down as “marine snow” enjoy a truly munificent feast, consuming the good stuff right down to the skeleton. The next diners to arrive are Osedax worms and their bacteria sucking the bones dry of any remaining fats and proteins. Done yet? Not quite; the carcass that provided nutrition is now a structure that shelters sea floor colonies for centuries to come. Sewell takes a wry view of all this post-mortem activity, mindful of the considerable grossout factor, but she’s also hyper-aware of her audience’s desire to be in the know on this arcane phenomena that is just beginning to be researched and understood. Therefore, she snarkily peppers her text with terms for sophisticates (references to dinner “seatings”), domain-specific words defined both in text and a glossary for smarty pants (benthic is the lowest water level; Osedax are bone eaters), and monikers anyone would be proud to slip into a conversation (“zombie worms, which are also called bone-eating snot worms”). Tavis gets the humor, cartooning the diners with obvious gusto, but he also makes the concepts of life at varying sea levels clear and memorable, even salvaging a bit of dignity for the deceased, whose death assures life in the deep. End matter includes thumbnail info bites on some of the featured marine life, as well as current research on whale falls. Young whale enthusiasts will lap this up, and primary-grade science teachers will have the crown jewel of the next marine life unit. " — EB, Bulletin of the Center for Children's Books

"A fish in both natty attire and a heavy-duty submersible invites readers on a tour of the deepest,darkest ocean depths where some denizens glow, some have transparent heads, and many live on “whale falls.” What are those, you ask? When a whale dies, its body sinks and becomes dinner for swarms of opportunistic feeders from hagfish and ravenous sleeper sharks to zombie worms and chemoautotrophic bacteria. The skeletal remains of this “gift that keeps on giving”can last for centuries, providing support for colonies of coral and sea anemones. Tavis brightens his setting’s inky depths with glowing, brightly hued, and proficiently rendered images of voracious sea creatures converging on their benthic banquet. Along with notes for a select photo gallery of café customers, Sewell closes with a report on the rare discovery of one 1987 fall, plus engaging profiles of two marine biologists she tapped as consultants. A revealing glimpse of a rarely studied link in the oceanic food chain." — John Peters, Booklist