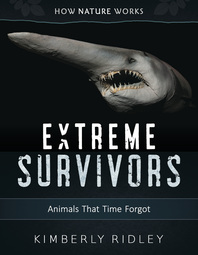 More than 99 percent of all life forms have gone extinct during the 3.6-billion-year history of life on Earth. Other organisms have changed dramatically, but not our extreme survivors. Evolution may have altered their physiology and behavior, but their body plans have stood the test of time.

How have these living links with Earth’s prehistoric past survived? The search for answers is leading scientists to new discoveries about the past—and future—of life on Earth. The survival secrets of some of these ancient creatures could lead to new medicines and treatments for disease.

“Ten creatures that make the dinosaurs look like newcomers. Properly noting that evolution works continuously on all life, Ridley profiles multicelled animals that have nonetheless really withstood the test of time without major alteration. These include the lizardlike tuatara (200 million years), the hardy lungfish (300 million years), sponges (600 million years), and possibly even more ancient comb jellies: "among the earliest animals to have…a butt." Winning close-ups of a roly-poly tardigrade (530 million years) and luridly snaggle-toothed goblin sharks (125 million years) lead off a spectacular suite of photos to which the author adds pithy descriptive comments and reflections on evolutionary processes, plus insights into just how these survivalists might have endured when 99 percent of all other life forms have gone extinct. Humans (200,000 years), represented here by a picture of a racially diverse group of children, are a long way from demonstrating similar longevity. Perspective-building intros to some of our most ancient relatives. (timeline, summary facts, glossary, further reading) (Nonfiction. 10-13) ” — Kirkus

“Award-winning author Kimberly Ridley presents Extreme Survivors: Animals that Time Forgot, a hardcover nonfiction title introducing young readers to strange and wondrous animal species that have avoided extinction for millions of years. Since they closely resemble their ancestors, they offer modern scientists clues to what life was like in the distant past. Striking, full-color photography offers an up-close and personal glimpse of animals such as the lungfish, the microscopic tardigrade, the chambered nautilus, the ferocious goblin shark, the New Zealand tuatara (closest living cousin of the dinosaurs), and much more. Highly recommended, especially for school and public library children's nonfiction collections. ” — Diane Donovan, Editor, Children's Book Watch