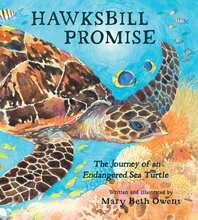 There is a deserted bay on a small island off Antigua where hawksbill turtles crawl ashore at night during the mating season to lay their eggs. Two months later the hatchlings—each weighing less than an ounce—emerge from the sand and scramble to the sea in the moonlight. Only a lucky few survive.

Mary Beth Owens was inspired by her admiration and concern for these critically endangered animals to write and illustrate this beautiful book. The narrator—a craggy, ancient jumby tree that stands sentinel over the bay—observes a hawksbill’s arrival by night, her arduous trek to excavate a nest and bury her eggs, her solitary return to the sea, and the later diaspora of her hatchlings. Spare prose complements pages saturated with Caribbean color or brooding in ghostly moonlight.

“5 stars! Hawksbill Promise: A Sea Turtle’s Journey is a good story for any age of reader who enjoys the islands because chances are that they also love turtles. There is a lot to be learned from this story, and the added information included at the end of the book was a definite bonus. Read Hawksbill Promise: A Sea Turtle’s Journey, and you will learn a lot about the journey of this special sea creature.” — Ania - Age 8, Kids' Book Buzz

To whom would you recommend this book? Perfect for children between the ages of four and eight.

Who should buy this book? Public and school libraries, preschools, daycare centers, anyone who works with children between the ages of four and eight.

Where would you shelve it? Beginner nonfiction books

Should we (librarians/readers) put this on the top of our “to read” piles? Yes