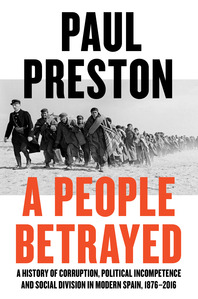 Nowhere does the ceaseless struggle to maintain democracy in the face of political corruption come more alive than in Paul Preston’s magisterial history of modern Spain.

The culmination of a half-century of historical investigation, A People Betrayed is not only a definitive history of modern Spain but also a compelling narrative that becomes a lens for understanding the challenges that virtually all democracies have faced in the modern world.

Whereas so many twentieth-century Spanish histories begin with Franco and the devastating Civil War, Paul Preston’s magisterial work begins in the late nineteenth century with Spain’s collapse as a global power, especially reflected in its humiliating defeat in 1898 at the hands of the United States and its loss of colonial territory.

This loss hung over Spain in the early years of the twentieth century, its agrarian economic base standing in stark contrast to the emergence of England, Germany, and France as industrial powers. Looking back to the years prior to 1923, Preston demonstrates how electoral corruption infiltrated almost every sector of Spanish life, thus excluding the masses from organized politics and giving them a bitter choice between apathetic acceptance of a decrepit government or violent revolution. So ineffective was the Republic—which had been launched in 1873—that it paved the way for a military coup and dictatorship, led by Miguel Primo de Rivera in 1923, exacerbating widespread profiteering and fraud. When Rivera was forced to resign in 1930, his fall brought forth a succession of feeble governments, stoking rancorous tensions that culminated in the tragic Spanish Civil War.

With astonishing detail, Preston describes the ravages that rent Spain in half between 1936 and 1939. Tracing the frightening rise of Francisco Franco, Preston recounts how Franco grew into Spain’s most powerful military leader during the Civil War and how, after the war, he became a fascistic dictator who not only terrorized the Spanish population through systematic oppression and murder but also enriched corrupt officials who profited from severe economic plunder of Spain’s working class.

The dictatorship lasted through World War II—during which Spain sided with Mussolini and Hitler—and only ended decades later, in 1975, when Franco’s death was followed by a painful yet bloodless transition to republican democracy. Yet, as Preston reveals, corruption and political incompetence continued to have a corrosive effect on social cohesion into the twenty-first century, as economic crises, Catalan independence struggles, and financial scandals persist in dividing the country.

Filled with vivid portraits of politicians and army officers, revolutionaries and reformers, and written in the “absorbing” (Economist) style for which Preston is so revered, A People Betrayed is the first historical work to examine the continuities of political unrest and national anxiety in Spain up until the present, providing a chilling reminder of just how fragile democracy remains in the twenty-first century.

“Prodigiously detailed and absorbing... Mr. Preston is, by some distance, the most prolific historian of modern Spain.... Born in 1946—seven years after the end of the Spanish Civil War—Mr. Preston is the reigning king of a tribe of brilliant 20th-century British historians who have shaped our understanding of Spain, often better than their Spanish counterparts have done with their own history.” — Tunku Varadarajan, Wall Street Journal

“A People Betrayed is a magisterial study of [Spain's] turbulent past, seen through the optic of those apparently ineradicable twins: corruption and political incompetence. . . . The history recounted in A People Betrayed is a long one, but it races along in riveting fashion, replete with eye-catching and often blackly humorous anecdotes. . . . Preston’s narrative combines his gift for cogent, summarising clarity and for telling detail. . . . Preston has written an admirable book – a lively, comprehensive history of modern Spain, but also, at barely one remove, a compelling essay on contemporary corruption, which is especially worthy of attention today, as we confront an emergency that underlines what states are really for.” — Helen Graham, The Guardian

“As an historian of modern Spain in the English-speaking world, Preston has no peer. A People Betrayed has all the merits we have come to expect from Paul Preston: from wide-ranging scholarship to a deep but unsentimental and open-eyed love for Spain and its people. He fully understands how painful elements of the past—from the country’s heritage as a colonial power to the long hand of Franco—still cast a shadow on the present.” — Adam Hochschild, author of Spain in Our Heart

“Preston’s work is a powerful intervention in a Spanish discussion. Its significance transcends the events it brings to light, and suggests some basic re-evaluations of recent European history.” — Thomas Snyder, The New Republic, on The Spanish Holocaust

“His eye for the winning detail makes his subjects quite human and enlivens the world of political maneuvering into something other than dry history.” — Joshua Goode, Washington Post, on Juan Carlos

“It is difficult to see this marvelous, brilliantly written and surely authoritative biography ever being matched. It is a book which any historian would be proud to have written.” — Ian Kershaw, Times Higher Education (London), on Franco