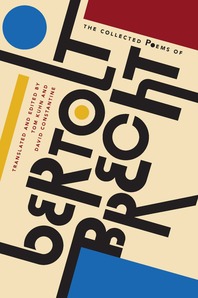 One of the most important poetry publications in years, The Collected Poems of Bertolt Brecht appears in English for the first time.

Widely celebrated as the greatest German playwright of the twentieth century, Bertolt Brecht was also, as George Steiner observed, “that very rare phenomenon, a great poet”. Hugely prolific, Brecht wrote some 2,000 poems and songs—though fewer than half were published in his lifetime and early editions were extremely selective. Now, award-winning translators Tom Kuhn and David Constantine give us the most comprehensive English collection of Brecht’s poetry to date. Written between 1913 and 1956, these poems celebrate Brecht’s unquenchable “love of life, the desire for better and more of it” and reflect the technical virtuosity of an artist driven by bitter and violent politics, as well as by the untrammelled forces of love and erotic desire. The Collected Poems of Bertolt Brecht is a monumental achievement and a reclamation.

“[A] breath of fresh air…Within the bold statements, the direct speech and the willful naivety there's a lyrical dynamism and verbal agility that allows its author to dance and skip his way through the potential pitfalls of political rhetoric.” — Simon Armitage

“His poetry served as the lyric laboratory of his personal, political, and philosophical ideas. Thanks to this astonishing compendium, English-speakers finally have access to this essential aspect of Brecht’s writing and thinking. ” — Yuval Sharon

“We need Brecht more than ever, no less for his capacity to so movingly “take pleasure also/ in the song of every blackbird after me” than for the power of his political poems and songs to take on demagogues and dickheads.” — Paul Muldoon

“Brecht was a great a poet as he was a playwright: pungent and moving, both sharply aphoristic and generously expansive, morally committed, with a deep, complicating sense of his own mixed motives, and with unexpected moments of emotional intensity.” — Edward Mendelsohn

“The more than 1,000 entries — some published for the first time in English — are only about half of Brecht's lyric output. But they give a sense of the fertility of his pristine, unsentimental language and the breadth of subject and form.” — The International New York Times

“These poems, half of which appear here in English for the very first time, are anything but dry. They can be funny and bleak, moralising and wicked, passionate and philosophical, with a rich seam of coal-black humour. In his plays, Brecht kept the audience at arm’s length, but here he invites them in. The translators, Tom Kuhn and David Constantine, create a voice for Brecht that feels fresh and alive, whether in tightly knit rhymes, free verse or prose. It’s easy to forget you’re reading a translation.” — The Telegraph

“It is a brilliant collection, full of great poems and memorable lines... Above all, the book reveals the extraordinary consistency of address, sympathy and range of subject in Brecht’s work over a 40-year period.” — Morning Star

“Kuhn and Constantine speak eloquently of the ways in which Brecht's poems 'are never just the servants of his politics... they exceed his engagement in the particular and necessary cause.' And they are not entirely the servants of Brecht himself.” — London Review of Books