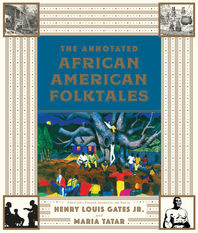 The New Annotated African American Folktales revolutionises the canon like no other volume. Henry Louis Gates Jr and Maria Tatar assemble a ground-breaking collection of folktales, myths and legends that revitalise a vibrant African American past. Beginning with introductory essays and 20 seminal African tales, Gates and Tatar present nearly 150 African American stories, among them familiar Brer Rabbit classics but also stories like “Witches Who Ride”, out-of-print tales from the Southern Workman and stories that bring Caribbean and Latin American literature in to the canon.

“This handsome book is trumpeted as "the most comprehensive and ambitious collection of African American folktales ever published". It makes good on the claim with 150 stories ranging from the Brer Rabbit tales to fables retrieved from before the American revolution that originated with newly arrived slaves.” — New Statesman

“Edited with a foreword, introduction and notes by Henry Louis Gates Jr and Maria Tatar, these nearly 150 African American folktales animate our past and reclaim a lost cultural legacy to redefine American literature.” — The Voice