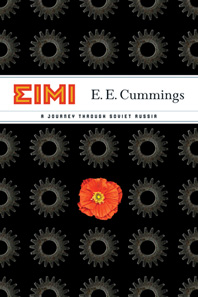 A reissue of E. E. Cummings's long-unavailable, yet pointed and moving story of a journey through Soviet Russia.

Unavailable for more than fifty years, EIMI finally returns. While sometimes termed a "novel," it is better described as a novelistic travelogue, the diary of a trip to Russia in the 1930s during the rise of the Stalinist government. Despite some contempt for what he witnesses, Cummings's narrator has an effective, occasionally hilarious way of evoking feelings of accord and understanding. As Ezra Pound wrote, Cummings's Soviet Union is laid "out there pellucidly on the page in all its Slavic unfinishedness, in all of its Dostoievskian slobberyness....Does any man wish to know about Russia? 'EIMI'!"

A stylistic tour de force, EIMI is a mélange of styles and tones, the prose containing many abbreviations, grammatical and syntactical shifts, typographical devices, compounds, and word coinages. This is Cummings's invigorating and unique voice at its finest, and EIMI is without question one of his most substantial accomplishments.