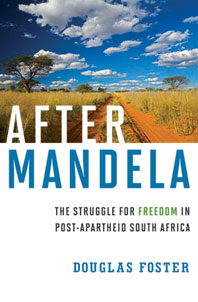 The most important historical and journalistic portrait to date of a nation whose destiny will determine the fate of a continent.

A brutally honest exposé, After Mandela provides a sobering portrait of a country caught between a democratic future and a political meltdown. Recent works have focused primarily on Nelson Mandela’s transcendent story. But Douglas Foster, a leading South Africa authority with early, unprecedented access to President Zuma and to the next generation in the Mandela family, traces the nation’s entire post-apartheid arc, from its celebrated beginnings under “Madiba” to Thabo Mbeki’s tumultuous rule to the ferocious battle between Mbeki and Jacob Zuma. Foster tells this story not only from the point of view of the emerging black elite but also, drawing on hundreds of rare interviews over a six-year period, from the perspectives of ordinary citizens, including an HIV-infected teenager living outside Johannesburg and a homeless orphan in Cape Town. This is the long-awaited, revisionist account of a country whose recent history has been not just neglected but largely ignored by the West.