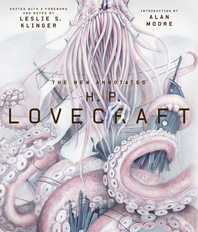 From across strange aeons comes the annotated edition of "the twentieth century's greatest practitioner of the classic horror tale" (Stephen King).

"Howard Phillips Lovecraft is beginning to emerge as one of that tumultuous period’s most critically fascinating and yet enigmatic figures", writes Alan Moore. But at the time of his death, Lovecraft was maligned by critics and ignored by the public. Leslie S. Klinger reanimates Lovecraft and charts the rise of the pulp writer. Lovecraft’s vast body of work—a mythos in which humanity is a blissfully unaware speck in a cosmos shared by ancient alien beings—is increasingly being recognised as the foundation for American horror and science fiction. With nearly 300 illustrations and more than 1,000 annotations, Klinger illuminates every hidden dimension of 22 of Lovecraft’s most canonical works.

"Norton's new volume must surely be the definitive collection. It is meticulously and imaginatively edited, beautifully illustrated and immaculately produced, with a thought-stirring introduction by the graphic novel writer Alan Moore." — New Statesman

"The actual book is as vivid as the stories themselves, and beautiful to boot, with its inky black cover and gold embossed tentacles. Perfect for anyone who enjoys exploring the outer regions of the imagination — and guaranteed to give you the shivers on a cold winter’s night." — Sarah Vine, Christmas Books 2014, Daily Mail

"Lovecraft will now garner increased critical attention because of Leslie S. Klinger’s sumptuous The New Annotated H. P. Lovecraft. While Klinger has supplied a sensitive introductory overview of the writer and his legacy, as well as marginal notes (mainly identifying the historical elements in the twenty-two selected stories), the great attractiveness of this volume lies in its illustrations." — The Times Literary Supplement

"Annotator Les Klinger is the man you want to have by your side, as you explore the Lovecratfian Darkness." — Neil Gaiman