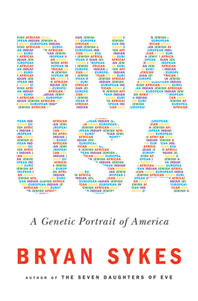 Crisscrossing the continent, a renowned geneticist provides a groundbreaking examination of America through its DNA.

The best-selling author of The Seven Daughters of Eve now turns his sights on the United States, one of the most genetically variegated countries in the world. From the blue-blooded pockets of old-WASP New England to the vast tribal lands of the Navajo, Bryan Sykes takes us on a historical genetic tour, interviewing genealogists, geneticists, anthropologists, and everyday Americans with compelling ancestral stories. His findings suggest:

• Of Americans whose ancestors came as slaves, virtually all have some European DNA.
• Racial intermixing appears least common among descendants of early New England colonists.
• There is clear evidence of Jewish genes among descendants of southwestern Spanish Catholics.
• Among white Americans, evidence of African DNA is most common in the South.
• European genes appeared among Native Americans as early as ten thousand years ago.

An unprecedented look into America's genetic mosaic and how we perceive race, DNA USA challenges the very notion of what we think it means to be American.

“Starred review. Sykes combines history, science, travel and memoir in one grand exposition of what it means to be an “American.” In a graceful text, the author delivers rich images of the American landscape, conversations with strangers, and historic asides on the waves of immigration, the Indian diasporas and the various federal laws that shaped the movements of people across the continent. ...Sykes should also be applauded for his skills as a storyteller, science expositor, travel companion and compassionate human being.” — Kirkus Reviews

“An authority on ancient DNA analysis, Sykes provides a nontechnical introduction to how Y chromosomes and mitochondrial DNA may be used to reveal ancestral heritage. Combining in-depth interviews with volunteers along with these genetic techniques, he attempts to create a biological portrait of the United States. Using a travel diary approach to describe his three-month coast-to-coast journey, he introduces the people he meets and reflects on how ancestry and heredity play into our culture, customs, and beliefs. While Sykes acknowledges that the sample is too small to draw significant conclusions, the results provide interesting perspectives on life in early America… These DNA portraits illustrate the complexity of human inheritance and how difficult it is to assign individuals to distinct groups.” — Library Journal

“As the author of The Seven Daughters of Eve and other books, Sykes is an old hand at writing about genetics for the general public. His experience shows as he deftly introduces highly technical information in reader-friendly ways… During his journey, Sykes encounters people who embrace DNA testing as a way to clear up messy genealogical records. He also meets skeptics, who see the technology as a way to discredit their cultural heritage. Sykes doesn’t shy away from these criticisms, presenting a well-balanced view of the disparate attitudes.” — Tina Hesman Saey, ScienceNews

“It may seem odd for the author of a book on human genetics and heredity to thank his travel agent in the acknowledgments, but in the case of this hybrid work of science and cross-country reportage it’s a fitting gesture… Sykes writes lucidly, creating his own unique mixture in a book that might be described as Travels With Charley meets The Double Helix.” — Abigail Meisel, New York Times Book Review