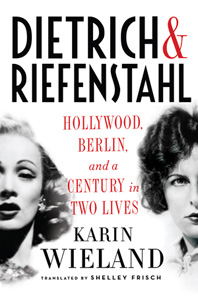 This magisterial dual biography illuminates two complex lives that began alike but were on opposite sides of the Second World War.

Marlene Dietrich and Leni Riefenstahl, born less than a year apart, lived so close to each other that Riefenstahl could see into Dietrich’s Berlin flat. Coming of age in the Weimar Republic, both sought fame in Germany’s silent film industry. While Dietrich’s depiction of Lola Lola in The Blue Angel catapulted her to Hollywood stardom, Riefenstahl—who missed out on the part—insinuated herself into Hitler’s inner circle and directed Nazi propaganda films, most famously, Triumph of the Will. Dietrich could never truly go home again, while Riefenstahl was contaminated by her political associations. Moving deftly between two stories never before told together, Karin Wieland contextualises these lives, chronicling revolutions in politics, fame and sexuality on a grand stage.

“Wieland offers abundant – and now and then overwhelming – material and produces a captivating chronological narrative that is rich in sources... The emerging story is fascinating...” — Times Higher Education

“Newly translated dual biography by German historian provides an illuminating look at two famous, ambitious women who reacted very differently to the Nazis...Via a fluent, often witty translation by Shelley Frisch, Wieland draws the portrait of women who were ambitious to a degree stunning in their day.” — The Guardian

“In telling their stories, Karin Wieland has decided to juxtapose their lives without making the comparisons explicit. This can be very effective: she is an evocative scene setter and so it is easy to grasp the implication that both women were created by their time and place.” — Literary Review

“... epic, enthralling tome about two of the 20th century's most compelling artists...” — The Independent

“Karin Wieland’s dual biography vividly describes a Weimar Germany in which the only way to get by was to try to get rich quick.” — Gaby Wood, This Week in Books, The Sunday Telegraph

“This excellent biography by an acclaimed German historian explores their life stories against the backdrop of turbulent times.” — Choice