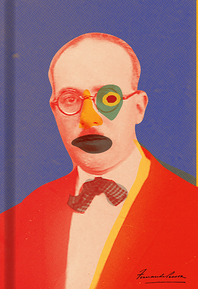 For the first time—and in the best translation ever—the complete Book of Disquiet, a masterpiece beyond comparison

The Book of Disquiet is the Portuguese modernist master Fernando Pessoa’s greatest literary achievement. An “autobiography” or “diary” containing exquisite melancholy observations, aphorisms, and ruminations, this classic work grapples with all the eternal questions. Now, for the first time the texts are presented chronologically, in a complete English edition by master translator Margaret Jull Costa. Most of the texts in The Book of Disquiet are written under the semi-heteronym Bernardo Soares, an assistant bookkeeper. This existential masterpiece was first published in Portuguese in 1982, forty-seven years after Pessoa’s death. A monumental literary event, this exciting, new, complete edition spans Fernando Pessoa’s entire writing life.

“A triumph of scholarship and translation, this collaboration between editor Pizarro and translator Jull Costa presents in English one of the greatest works of Portuguese fiction in its entirety for the first time. Composed mostly on the eve and during the aftermath of World War I, The Book of Disquiet looks movingly at inertia and refusal; it’s the Portuguese cousin of “Bartleby, the Scrivener” and Waiting for Godot. First published in 1982, 47 years after Pessoa’s death, The Book of Disquiet presents a series of “random impressions,” diary like passages that double as articulations of personal philosophy. Arranging these fragments chronologically for the first time, Pizarro reveals that Pessoa composed them in the voices of two distinct characters: the office clerk Vicente Guedes and the bookkeeper Bernardo Soares. Pessoa wrote Guedes’s section first, and it’s easy to see why these earlier texts, which date from 1913 to 1920, have been left out or buried among Soares’s entries in previous editions of the novel. Guedes is all preening self-absorption and jejune metaphysics; he’s like an introverted version of Dadaist Tristan Tzara. “I want your reading of this book to leave you with the sense of having lived through some voluptuous nightmare,” he declares. Pessoa himself planned a “rigorous” pruning and revision of Guedes’s droning that never occurred, and newcomers to The Book of Disquiet should consider skipping straight to Soares’s half. This is the text that has earned the novel’s standing as Pessoa’s piece de resistance. Where Guedes imagines himself a gifted dreamer trapped in a prison cell, Soares wryly likens himself to a “little girl embroidering pillowcases” to pass the time. This is more than a difference in tone; Soares sees an existential fraternity that Guedes does not. Sitting in his “pokey office,” he recognizes himself as one of many people who make their way through life with “sad, exalted hearts.” He notes: “I had great ambitions and extravagant dreams, but so did the errand boy and the seamstress.... The only thing that distinguishes me from them is that I can write.” Embroidering the skies and streets of Lisbon, and his own interior moodscapes, into words is the one comfort left to an orphan who has witnessed “so many noble ideas fallen onto the dungheap.” Jull Costa, who first took a crack at The Book of Disquiet early in her career, gorgeously renders Soares’s melancholy descriptions. In a novel almost entirely stripped of plot and secondary characters, the fresh translation of these exquisite scenes is everything. Pessoa created more than 70 authorial characters, or “heteronyms,” over his lifetime, but Soares was the one most similar to the author. His final entries were composed in 1934, a year before Pessoa’s death. Through Soares, we can begin to fathom why Pessoa produced trunks full of manuscripts that were published only after he died. Pursuing anything in this world is folly, Soares thinks, but “to know how to exist through the written voice and the intellectual image! That’s what life is about."” — Marcela Valdes, Publisher Weekly (Starred Review)

“As searing as Rilke or Mandelstam.” — The New York Times Book Review

“The ultimate futility of all accomplishment, the fascination of loneliness, the way sorrow colors our perception of the world: Pessoa’s insight into his favorite themes was purchased at a high price, but he wouldn’t have had it any other way. A modern masterpiece.” — Adam Kirsch, The New Yorker

“As addictive, and endearing, as Borges and Calvino.” — The Washington Post Book World

“One of the central figures of European modernism.” — Max Nelson, The New York Review of Books

“Pessoa’s work The Book of Disquiet is one of life’s great miracles. Pessoa invented numerous alter egos. Arguably, the four greatest poets in the Portuguese language were all Pessoa using different names.” — NPR

“Nobody can render the the hollowed horror of a world wrung out quite as gorgeously as Pessoa.” — Bookforum

“Lyrical, poetic—but to call these paragraphs prose poems would be misleading. There is something necessarily prosaic about them. The Book of Disquiet is caught up in the steady drumbeat of ordinary life and all its detritus: a favorite pair of boots, a type of pant that’s in fashion, the way people in Lisbon pronounce Trás-os-Montes, but most of all the ordinary noise of the self thinking about itself. Its pages, like Pessoa’s trunk, are thick with thoughts.” — Poetry Foundation

“The Book of Disquiet, a literary vortex that, even in completeness, remains incomplete. A reading experience like no other. It is thrilling, confusing, upsetting, joyous, tedious and profound. You will never forget it, or stop wanting to return to it.” — Chris Power, The New Statesman

“Complete edition of a haunted autobiographical novel—or is it a fictionalized autobiography?—that has emerged as an existentialist classic in the 80-plus years since its author's death. Born in Lisbon in 1888, Pessoa might have taught J.D. Salinger and Thomas Pynchon a thing or two about anonymity. He wrote prolifically in three languages but published relatively little, and he hid behind assumed names and identities, some 75 of them in all, which he called 'heteronyms.' The present volume is a case in point, written over the course of many years in the person of two such assumed names, Vicente Guedes and, later, Bernardo Soares. As for Guedes, Pessoa opens, 'This book is not by him, it is him': it is a catalog of Kierkegaard-ian moods, of fears and loathings and the constant presence of death in a fundamentally tragic world. 'I failed life even before I had lived it, because even as I dreamed it, I failed to see its appeal,' writes Pessoa, and he proceeds to make sun-splashed Lisbon a gray and gloomy place. Though often somber, Pessoa is rarely tiresome; he reflects interestingly on such things as the development of science and aesthetics, the pleasures of wasting time ('For those subtle connoisseurs of sensations, there is a kind of handbook on inertia, which includes recipes for every kind of lucidity'), and, always, mortality: 'We are born dead, we live dead, and we enter death already dead.' Readers with a liking for Walter Benjamin and Miguel de Unamuno, Pessoa's intellectual kin, will find much of interest in Pessoa's pages...” — Kirkus Review

“In a time which celebrates fame, success, stupidity, convenience, and noise, here is the perfect antidote.” — John Lancaster, Daily Telegraph

“A favorite book: in its determined melancholy, its gentle audacity, and in its insistence on renunciation, frustration, and solitude as the nectars of life, it is almost scarily whole. *The Book of Disquiet* is a diary, but of a self that is several and precarious, and always more potential than actual. Its floating boundaries expand and contract, lazily animated by 'the horror of making our soul a fact.' It is in *The Book of Disquiet*—translated, beautifully, by Margaret Jull Costa—that Pessoa found himself most truly. The system of heteronyms allowed him to disown his words even as he wrote them. The heteronyms formed a small society of alter egos, 'a whole world of friends inside me.'” — Benjamin Kunkel, The Believer

“Readers with a particular interest in modernism will find this work indispensable.” — Publishers Weekly

“Pessoa’s rapid prose, snatched in flight and restlessly suggestive, remains haunting, often startling. There is nobody like him.” — W. S. Merwin

“A meandering, melancholic series of reveries and meditations. Pessoa's amazing personality is as beguiling and mysterious as his unique poetic output.” — William Boyd

“The very book to read when you wake up at 3 a.m and can't get back to sleep-mysteries, misgivings, fears, and dreams and wonderment. Like nothing else.” — Philip Pullman