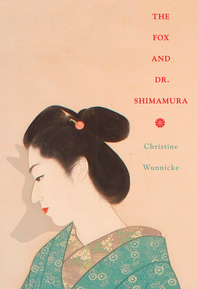 A delicious mix of East and West, of wonder and irony, The Fox and Dr. Shimamura is a most curious novel

The Fox and Dr. Shimamura toothsomely encompasses East and West, memory and reality, fox-possession myths, and psychiatric mythmaking. As an outstanding young Japanese medical student at the end of the nineteenth century, Dr. Shimamura is sent—to his dismay—to the provinces: he is asked to cure scores of young women afflicted by an epidemic of fox possession. Believing it’s all a hoax, he considers the assignment an insulting joke, until he sees a fox moving under the skin of a young beauty... Next he travels to Europe and works with such luminaries as Charcot, Breuer and Freud—whose methods, Dr. Shimamura concludes, are incompatible with Japanese politeness. The ironic parallels between Charcot’s theories of female hysteria and ancient Japanese fox myths—when it comes to beautiful, writhing young women—are handled with a lightly sardonic touch by Christine Wunnicke, whose flavor-packed, inventive language is a delight.

“A wonderful and most of all wonderfully told story.” — Die Zeit

“The Fox & Dr. Shimamura is a cornucopia of strange pathologies and historical oddities, spanning multiple continents and languages, that breaks down the polarities between religion and science, supernatural hauntings and neurotic hauntings, and Eastern and Western cultural ideologies. Dr. Shimamura, a Japanese neurologist who travels to the hotspots of psychiatry in early twentieth-century Europe, thinks in both Japanese and German, and harbors a slight disdain for the backwardness of Japanese science; yet while he prides himself on being a supremely rational, modern man, he can’t shake the conviction that he is possessed by a fox that slithers under his skin. Christine Wunnicke takes her place alongside the Japanese-German writer Yoko Tawada as an adept celebrator of cosmopolitan intermixture and the magic of subverting monocultural systems.” — Gregory Ariail, Kenyon Review

“A marvel, a wonder—a deeply strange little novel about medicine, memory, and fox possession. With her delicate prose, arch tone, and mischievous storytelling, Wunnicke proves herself a master of the form.” — Kirkus (starred review)

“A mythical, mystical, and at times bizarre tale of a late nineteenth-century Japanese doctor who is sent to remote areas of the Shimane prefecture to cure women of fox possession. Wunnicke slyly reminds us that, although women are powerless, even when it comes to treating their own illnesses, they find ways to quietly assert their will over men.” — Melissa Beck, Music and Literature

“Wunnicke paints nightmarishly hectic European scenes in a palette of absinthe and Toulouse-Lautrec, and alternates them with nightmarishly static scenes of Shimamura’s declining, colorless present in Japan. Connections proliferate like reflections in a house of mirrors, fascinating and also vaguely queasy — the narrative is disorienting in every sense of the word. But absurdist fiction, like psychotherapy, requires an investment of energy and a suspension of judgment. The Fox and Dr. Shimamura is worth the effort.” — New York Times Book Review

“The Fox and Dr. Shimamura recovers the almost magical counternarratives running parallel to key moments in the history of western modernity. Shimamura is marked as someone who is navigating the hazy boundaries of gender, finding through the fox spirit some access to an internalized femininity that is rebuked by his society in the form of history’s most gendered diagnosis. Rich and engaging.” — The Carolina Quarterly

“A miniature voyage around the world and into the not-so-distant past. Wunnicke’s deftly drawn vignettes of Dr. Shimamura’s life provide tantalizing glimpses into the manifestations of Eastern and Western psychiatry at the turn of the last century.” — Catherine Venner, World Literature Today

“Wunnicke spoofs the misogynist history of psychology in this clever and rewarding novel of slippery memories tinged with Japanese myths: this gracefully amusing blend of history and imagination will beguile readers.”

““Delightfully crazy—very nicely told: Wunnicke succeeds in drawing us into the logic of this mad world, where the fox moving under a girl’s skin is as vivid (and believable?) as Charcot’s demonstration of the arc of la grande hysterie.”” — Rosmarie Waldrop