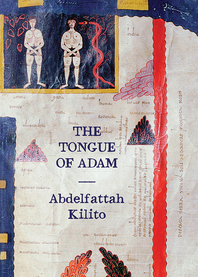 A playful and erudite look at the origins of language

In the beginning there was one language—one tongue that Adam used to compose the first poem, an elegy for Abel. “These days, no one bothers to ask about the tongue of Adam. It is a naive question, vaguely embarrassing and irksome, like questions posed by children, which one can only answer rather stupidly.” So begins Abdelfattah Kilito’s The Tongue of Adam, a delightful series of lectures. With a Borgesian flair for riddles, stories, and subtle scholarly distinctions, Kilito presents an assortment of discussions related to Adam’s tongue, including translation, comparative religion, and lexicography: for example, how, from Babel onward, can we explain the plurality of language? Or can Adam’s poetry be judged aesthetically, the same as any other poem? Drawing from the commentators of the Koran to Walter Benjamin, from the esoteric speculations of Judaism to Herodotus, The Tongue of Adam is a nimble book about the mysterious rise of humankind’s multilingualism.

“Abdelfattah Kilito turns his obsession with 'the fact of language' into a thrilling tour de force that invites us to rethink the myths of our human origins, leading us into a labyrinthine wonder world of linguistic inquiries.” — Poupeh Missaghi, Asymptote Journal

“Yet his commentary on the age-old debate, though minimal and mostly contained in an afterword, reveals his personal connection to the subject as a writer in both French and Arabic, making the work both poignant and relevant for contemporary readers.” — Publishers Weekly

“In this slim volume based on his lecture series, prominent Moroccan writer Kilito muses on the origins of multilingualism via an analysis of the historical debate about what language Adam and his family spoke. Citing an array of sources—medieval Arab theologians, the Hebrew Bible, Herodotus, and Holy Roman Emperor Frederick II—he opens up a new world for his reader, demonstrating the religious and philosophical urgency this question held for many through history and the many forms it has taken, including debates over whether poetry could be written by Adam and experiments with depriving children of language. Kilito treats his history with respect (especially considering the implications and controversial nature of the questions) and, with his blend of erudition and whimsy, comparisons to Borges are inevitable. Yet his commentary on the age-old debate, though minimal and mostly contained in an afterword, reveals his personal connection to the subject as a writer in both French and Arabic, making the work both poignant and relevant for contemporary readers. Fans of Kilito’s work should be pleased here, and those who have never read him should be intrigued this introduction. ” — Publishers Weekly (starred review)

“The Tongue of Adam is a quiet intellectual indictment of racial, ethnic, and national chauvinism, a text which derives an egalitarian beginning to language from the oldest of religious traditions. A brilliant and necessary book.” — Mohamad Saleh, The Culture Trip

“Reading Kilito for me has always been a kind of adventure. We normally speak of writing as an adventure, but Kilito dares his reader to travel with him, on a quest to override the boundaries between reality and fiction, between literary criticism and storytelling.” — Elias Khoury

“The abiding spirit is Borgesian, a lifelong curiosity about the nature of words and books and how texts call out to and comment on each other....As a scholar of classical Arabic literature, Kilito employs those texts to ask intriguing, vexing or playful questions about how words work.” — Ron Slate

“One would be hard-pressed to find a Moroccan writer who is more respected by his peers and more appreciated by his readers than Abdelfattah Kilito.” — Laila Lalami, The Nation

“Borges’s afterglow falls on Kilito’s pages, and he shares the Argentinian’s relish for puzzles, mazes, and riddling forms, as well as a love of pulp on one hand and the rare and raffiné on the other, al-Jahiz’s philosophy of discretion alongside Tintin, Sufi metaphysical lyrics and the Queen of the Serpents’ spells. Kilito is a mandarin who likes comic books.” — Marina Warner, The London Review of Books

“Abdelfattah Kilito's The Tongue of Adam is the rarest of essays: intensely focused and full of surprises, instructive and illuminating. To read this book is to set out on an astonishing and unique voyage through through classical Arabic literature.” — Daniel Heller-Roazen