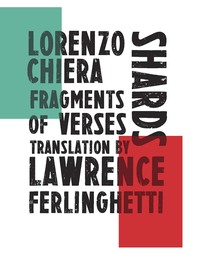 Sensual and glimmering, Lorenzo Chiera’s elliptical fragments evoke nights of bawdy excess in Trastevere (“City made of Roman ruins . . . / what a whorehouse!”), translated here by one of the most renowned poets of our time.

“Lawrence gets you laughing then hits you with the truth.” — Francis Ford Coppola