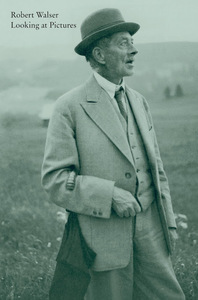 A special side of Robert Walser: his essays on art

A beautiful and elegant collection, with gorgeous full-color art reproductions, Looking at Pictures presents a little-known side of the eccentric Swiss genius: his great writings on art. His essays consider Van Gogh, Cezanne, Rembrandt, Cranach, Watteau, Fragonard, Brueghel and his own brother Karl and also discuss general topics such as the character of the artist and of the dilettante as well as the differences between painters and poets. Every piece is marked by Walser’s unique eye, his delicate sensitivity, and his very particular sensibilities—and all are touched by his magic screwball wit.

“This jeweled box of a book... float[s], wonderfully, somewhere in a land between short story and criticism.” — Randy Kennedy, The New York Times

“"Everyone who reads Walser falls in love with him."” — Nicholas Lazard, The Guardian

“"Written between 1902 and 1930 and, with two exceptions, previously untranslated, the pieces gathered here elaborate a nervous, slapstick sort of hack journalism that set the stage for a fabulously experimental modernist writing situation whose fans included Kafka, Musil, and Benjamin."” — John Kelsey, Artforum