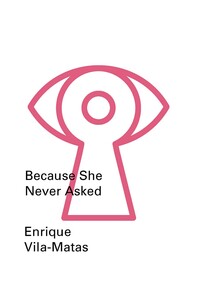 Because She Never Asked is a story reminiscent of that reached by the travelers in Patricia Highsmith's Stranger on a Train. The author first writes a piece for the artist Sophie Calle to live out: a young, aspiring, French artist travels to Lisbon and the Azores in pursuit of an older artist whose work she’s in love with. The second part of the story tells what happens between the author and Calle. She eludes, him; he becomes blocked, and suffers physical collapse.

“Something strange happened along the way,” Vila-Matas wrote. “Normally, writers try to pass a work of fiction off as being real. But in Because She Never Asked, the opposite occurred: in order to give meaning to the story of my life, I found that I needed to present it as fiction.”

“The literary tradition of Spain feels most ingenious when playfully blurring genres, and the Catalan novelist Enrique Vila-Matas may well be the current master of that.” — Yasmine El Rashidi, Artforum

“Through its mesmerizing structure, it asks bold questions about the nature of storytelling, and contrasts the ways in which the novelist and the fine artist construct narratives.” — Tobias Carroll, Signature Reads

“Enrique Vila-Matas is playful and funny and among the best Spanish novelists.” — Colm Toibin