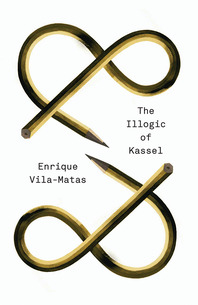 A literary look at one of Europe’s most acclaimed art exhibitions by a Spanish author “offering strange cerebral satisfactions” (Village Voice).

A puzzling phone call shatters a writer’s routine. An enigmatic female voice extends a dinner invitation, and it soon becomes clear that this is an invitation to take part in the documenta, the legendary exhibition of contemporary art held every five years in Kassel, Germany.  The writer’s mission will be to sit down to write every morning in a Chinese restaurant on the outskirts of town, transforming himself into a living art installation. Once in Kassel, the writer is surprised to find himself overcome by good cheer as he strolls through the city, spurred on by the endless supply of energy at the heart of the exhibition. This is his spontaneous, quirky response to art, rising up against pessimism.With humor, profundity, and a sharp eye, Enrique Vila-Matas tells the story of a solitary man, who, roaming the streets amid oddities and wonder, takes it upon himself to translate from a language he does not understand.

“An enjoyable journey through the mind of a magnificent Spanish author.” — Publishers Weekly

“I don't know Vila-Matas personally, nor am I planning to meet him. I prefer to read him and let his literature pervade me.” — Pedro Almódovar

“An elegant and ironic writer. Vila-Matas is one of Spain's most distinguished novelists.” — Rachel Nolan, The New York Times

“Enrique Vila-Matas has pioneered one of the contemporary literature's most interesting responses to the great Modernist writers.” — The Paris Review

“Vila-Matas leads the reader through a whimsical tour of art installations and occurrences, all the while referencing authors and artists that enhance how his narrator perceives (e.g. Kafka, Walser, Roussel, Gaddis, Duchamp, Dali, and Calle).” — Rob Stephenson, Rain Taxi

“For Vila-Matas, literature is a chamber of echoes. But rather than thinking of this as a criticism, this is to be embraced—one of literature’s eternal beauties.” — Tristan Foster, Words Without Borders

“Vila-Matas is a remarkable ironist, a skill he deploys throughout Kassel and A Brief History as sly humour, but also as a destabilization technique to create nebulous, discomfiting spaces…” — Pasha Mall, The Globe and Mail