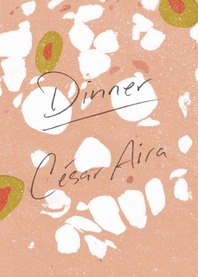 Was it a nightmare—the result of a bad case of indigestion—or did something truly scary happen after dinner in the Argentine town of Coronel Pringles?

One Saturday night a bankrupt bachelor in his sixties and his mother dine with a wealthy friend. They discuss their endlessly connected neighbors. They talk about a mysterious pit that opened up one day, and the old bricklayer who sometimes walked to the cemetery to cheer himself up. Anxious to show off his valuable antiques, the host shows his guests old windup toys and takes them to admire an enormous doll. Back at home, the bachelor decides to watch some late night TV before retiring. The news quickly takes a turn for the worse as, horrified, the newscaster finds herself reporting about the dead rising from their graves, leaving the cemetery, and sucking the blood of the living—all somehow, disturbingly reminiscent of the dinner party.

“Aira’s works are like slim cabinets of wonder, full of unlikely juxtapositions. His unpredicatbility is masterful.” — Rivka Galchen, Harper's

“Aira’s output has been a steady tickle of irrefutable genius and deepening strangeness.” — Publishers Weekly

“Dinner is far more intelligent than your average zombie tale…Aira adds extra depth to what lies just beneath the surface.” — Jessica Loudis, The Times Literary Supplement

“Humor goes from surface to bottom of Dinner.” — Jeff Bursey, The Quarterly Conversation