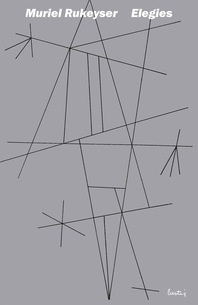 An elegant relaunch of Muriel Rukeyser’s Elegies, previously available only in a limited edition, celebrates the centennial of her birth

First published by New Directions in 1949, Muriel Rukeyser’s Elegies were written over a seven years period the end of the Spanish Civil War, World War II, Hiroshima and Nagasaki, and the beginnings of the Cold War. Both and homage to Rilke’s Duino Elegies and a spiritual reckoning that is particularly resonant today, these poems present no angelic orders, only the difficulties of living in the modern world, the depths of shipwreck, and “Love that gives us ourselves, in the world known to all.”

“The breadth, innovation, variety, and daring of Muriel Rukeyser’s work have always defied efforts to confine her. Rukeyser’s poetry is unequalled in the twentieth-century United States in its range of reference, its generosity of vision, and its energy.” — Adrienne Rich