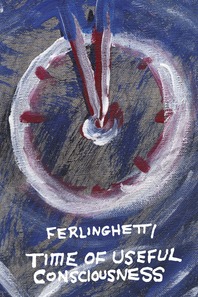 Lawrence Ferlinghetti's first book since Poetry as Insurgent Art, a new call to action and a vivid picture of civilization moving towards its brink.

New Directions is proud to announce a riveting and galvanizing new book by Lawrence Ferlinghetti. At ninety-three, he shows more power than most any other poet at work today. Ferlinghetti describes his new book, Time of Useful Consciousness, as “a fragmented recording of the American stream-of-consciousness, always westward streaming; a people’s poetic history in the tradition of William Carlos Williams’ Paterson, Charles Olson’s Maximus, Allen Ginsberg’s Fall of America, and Ed Sanders’ America: a History in Verse. ‘Time of Useful Consciousness, is an aeronautical term denoting the time between when one loses oxygen and when one passes out, the brief time in which some life-saving action is possible.”Ferlinghetti’s first book since Poetry as Insurgent Art, the fierce and immediate Time of Useful Consciousness presents poetry written “in ways that those who see poetry as the province of the few and educated had never imagined” (The New York Times Book Review).

“Lawrence Ferlinghetti is a national treasure and the kind of poet laureate we really deserve.” — CounterPunch

“In the spirit of Whitman, [Ferlinghetti] unwinds a country in all its speed and vibrancy.” — San Francisco Chronicle

“Lawrence Ferlinghetti’s engrossing new work, Time of Useful Consciousness, is an ode to modern American myth. At ninety-two, Ferlinghetti has rhythm, he has vision, and he captures the magic energy of Jack Kerouac.” — The Coffin Factory

“Time of Useful Consciousness is a fresh missive from an elderly Beat who has always refused to sit down.” — Truthdig

“Ferlinghetti refers to Ginsberg as 'the Whitman of our age,' but Time of Useful Consciousness has that epic, galvanizing, country-hopping voice of a latter-day Good Gray as Ferlinghetti recreates the pioneer spirit of racing west for gold, for freedom, for art, for land, for the hell of it, for life—as well as all the messy stops along the way.” — Christopher Bollen, Interview Magazine