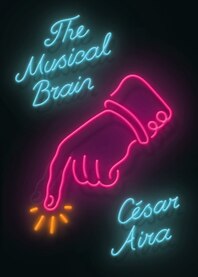 A delirious collection of short stories from the Latin American master of micro-fiction.

A delirious collection of short stories from the Latin American master of microfiction, César Aira–the author of at least eighty novels, most of them barely one hundred pages long–The Musical Brain & Other Stories comprises twenty tales about oddballs, freaks, and loonies. Aira, with his fuga hacia adelante or "flight forward" into the unknown, gives us imponderables to ponder and bizarre and seemingly out-of-context plot lines, as well as thoughtful and passionate takes on everyday reality. The title story, first published in the New Yorker, is the creme de la creme of this exhilarating collection.

“Once you start reading Aira, you don't want to stop.” — Roberto Bolaño

“Aira’s cubist eye sees from every ­angle. The stories in “The Musical Brain” exhibit the continuing narration of Aira’s improvisational mind. His characters — whether comic-strip ruffians, apes, subatomic particles or a version of his boyhood self — enter a shifting and tilting landscape of events that unhinge our temporal existence and render it phantasmagorical yet seemingly everyday in the unfolding. His matter-of-fact approach, accepting even the most outlandish episodes, suspends disbelief and encourages one’s own sense of displacement, of being released from the commonplace. Hail César!” — Patti Smith, The New York Times Book Review

“Everything in Aira has that Mad Scientist feel to it. ” — The Millions

“Exhilarating. César Aira is the Duchamp of Latin American literature. Aira is one of the most provocative and idiosyncratic novelists working in spanish today and should not be missed.” — Natasha Wimmer, The New York Times

“Aira oversteps the bounds of realism, forcing the world to live up to his imagination.” — Benjamin Lytal, The New York Sun

“Aira delivers one surreal unraveling of reality after another that proceeds paradox by paradox into psychic realms” — Michael Upchurch, The Seattle Times

“Surreal, witty, and funny. ” — The Guardian

“Aira stresses the sublime without falling back on the props of magical realism” — Cristopher Byrd, The Believer

“The first collection of Aira's stories might be his masterpiece.” — Publishers Weekly, (starred review)

“Aira is firmly in the tradition of Jorge Luis Borges and W. G. Sebald, those great late modernists for whom fiction was a theater of ideas.” — Mark Doty, Los Angeles Times

“Aira seems fascinated by the idea of storytelling as invention, invention as improvisation, and improvisation as transgression, as getting away with something.” — The New York Review of Books

“Aira conjures a languorous, surreal atmosphere of baking heat and quietly menacing shadows that puts one in mind of a painting by de Chirico.” — The New Yorker

“Argentine author César Aira is an exquisite miniaturist who toys with avant-garde techniques. His work has drawn comparisons to Vladimir Nabokov and Italo Calvino for its gleeful literary gamesmanship and stories-within-stories.” — The Wall Street Journal

“His novels are eccentric clones of reality, where the lights are brighter, the picture is sharper, and everything happens at the speed of thought.” — Jacob Mikanowski, The Millions

“What a gift: to look forward to reading a new Aira novel from New Directions every year for the rest of one's life.” — Thomas McGonigle, Los Angeles Times

“One of the most celebrated authors in Latin America.” — New York Observer

“Outlandish B-movie fantasies are all part of the game. His best-known works are nonsensically hysterical. To love César Aira you must have a taste for the absurd, a tolerance for the obscurely philosophical, and a willingness to laugh out loud against your better judgment.” — Marcela Valdes, NPR Books

“A distinctive hallucinatory style, which blends together reality and fiction, the waking world and the dream world” — Chloe Schama, The New Republic

“César Aira is wild. The laws of gravity do not apply.” — James S. A. Correy, The Denver Post

“Aira's works are like slim cabinets of wonder, full of unlikely juxtapositions. His unpredictability is masterful.” — Rivka Galchen, Harper's

“César Aira's novels are the narrative equivalent of the Exquisite Corpse, that surrealist parlor game in which players add to drawings or stories without knowledge of previous or subsequent additions. Wildly heterogeneous elements are thrown together, and the final result never fails to surprise and amuse. Aira is wacky enough to play the game by himself, but the reader isn't left out either.” — The Millions

“A lampoon of our need for narrative. No one today does megafiction like Aira.” — Robyn Creswell, Paris Review