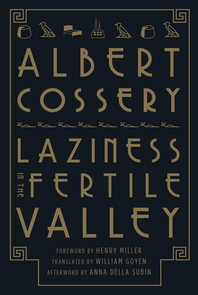 Laziness in the Fertile Valley is Albert Cossery’s biting social satire about a father, his three sons, and their uncle — slackers one and all. One brother has been sleeping for almost seven years, waking only to use the bathroom and eat a meal. Another savagely defends the household from women. Serag, the youngest, is the only member of the family interested in getting a job. But even he — try as he might — has a hard time resisting the call of laziness.

“Despite the seemingly unrelieved gloom and futility in which his figures move, Cossery nevertheless expresses in every work the indomitable faith in the power of people to throw off the yoke.” — Henry Miller