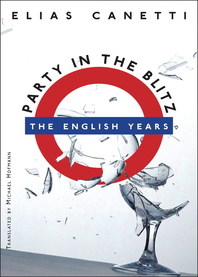 Elias Canetti originally intended Party in the Blitz to capture an image of his time in post-war London. Well known throughout Europe, Canetti scorned British intellectuals who weren’t familiar with his work. By force of will alone he accumulated English followers, but not before being christened “the godmonster of Hampstead.” Canetti’s memories of various people in his social circle are brief and scathing brimstone sketches. T.S. Eliot, Iris Murdoch, Wittgenstein, Herbert Read, Bertrand Russell–Canetti rakes them all over the coals. To Canetti, T.S. Eliot was nothing more than an American emigrant trying desperately to act British, and Canetti’s portrayal of Iris Murdoch, with whom he had an affair, is nothing short of brutal. Michael Hofmann’s translation pulls no punches, delivering the goods on Canetti’s searing injection: “when you write down your life, every page should contain something no one has ever heard about.”

“This is the fourth and final volume of Elias Canetti’s memoirs. Its predecessors…were poised, richly detailed and slightly dull; Party in the Blitz, however, is chaotic…and horribly fascinating.” — John Banville, The Nation

“Whether one agrees with Canetti or not, his eloquently sustained loathing is bracing stuff.” — Publishers Weekly

“[Canetti] can be as shrewd as Lichtenberg or La Rochefoucauld with an apt and concisely phrased insight.” — Michael Dirda, Washington Post

“[Gives] the reader a superb sense of what day-to-day life was like during the Battle of Britain.” — Marjorie Perloff, Bookforum